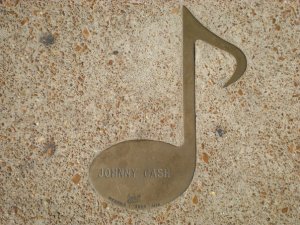 A favorite of mine that begins with C is Cash, Johnny – better known as Johnny Cash. Johnny Cash is linked to my two favorites, Elvis Presley and U2. Like Elvis, Johnny also started at Sun Studio. He, Elvis, Carl Perkins and Jerry Lee Lewis were dubbed the Million Dollar Quartet after a jam session one December night at Sun. U2 and Johnny Cash recorded a song together called The Wanderer.

I had always liked Johnny Cash because he was a legend, but it wasn’t until I moved to Memphis that I really became a fan. I attended the premiere of Johnny Cash’s America – and then my love for Johnny Cash began. I immediately bought all of his music, biographies and dvds. A few days later I drove to Dyess, Arkansas to Johnny’s boyhood home, which was featured in the movie Walk the Line about Johnny’s life. I then sought out his adult homes in Memphis. Although I was too late to see Johnny in person, I was able to see and meet his bass player and lifelong friend Marshall Grant. Marshall performed one last time, talked about his life with Johnny and then signed autographs. Last summer after the U2 360 show in Nashville, I finally visited Johnny Cash’s grave in Hendersonville, TN.

What do you think about Johnny Cash?

This blog post is part of my A to Z April Challenge – 26 of my favorites. Thanks for stopping by. I am also blogging the A to Z challenge on my other blog On the Road with U2.

10 Comments on C is Cash, Johnny – one of my favorite singers

Enjoying this beautiful Sunday afternoon! #reading #elvis 📖 #stayhome
April 5, 1994 RIP Kurt https://youtu.be/fregObNcHC8
Happy 1/2 Birthday to me! The first 6 months of my 47th year have been indescribable. I’ve read 47 books, had an amazing time in Memphis celebrating Elvis’ 85th Birthday with Jerry Schilling where I realized a dream buying one of Elvis’ rings, went to a great record store day, mourned my best friend of 15 years my baby Elvis who died and have been quarantined in my house for the past 12 days with my baby Cilla with no end in sight but I’m really enjoying it. Doubt my bulletin board will be filled up this year as I’m sure my trips will be postponed til next year, but I will fill it up with more books Ive read. Happy to be healthy. Happy to have already had all these wonderful experiences. Happy 1/2 Birthday to me!
April 4, 1968 #MLK https://youtu.be/aL4FOvIf7G8
Cilla loves working from home! #StayHome
That was fun! Thanks @nkotb for the live chat! See you next Wednesday! Stay safe! @jordanknightofficial @donniewahlberg @dannywoodofficial @jonathanrknight @joeymcintyre