I was still living in Memphis in 2010, so going to the all the Elvis Week events was very easy. But I never toured Graceland during Elvis Week because it was too crowded especially when I could go whenever I wanted – and I did with my annual pass.

My Elvis Week 2010 began on Thursday August 12th with the Back in Memphis benefit for Myrna Smith, one of The Sweet Inspirations who toured with Elvis in the 1970s. Myrna had become very sick and needed help with paying her medical bills, so Unlimited Elvis, a group from Denmark, turned their annual Back in Memphis event into a benefit for Myrna. The event was held at the Rose Theater at the University of Memphis and sadly did not have a high attendance. From 6 to 8pm, there was a small convention with Elvis memorabilia and Elvis’ friends in attendance. And at 8pm there was a concert. 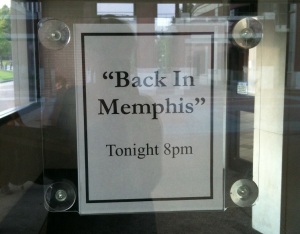 Those from the Elvis world who attended the convention were Sonny West (part of the Memphis Mafia), Barbara Hearn (Elvis’ girlfriend in the 50s) and WS Holland (Johnny Cash’s drummer). I bought The Memphis Boys (about Chips Moman and American Studios), and the author Roben Jones signed it for me. I bought June Moore’s book about Kathy Westmoreland (who toured with Elvis and was his girlfriend briefly), and it was signed but she wasn’t there. I also bought the new book from the Commercial Appeal called Elvis Presley’s Memphis. It was at this convention where I bought my Elvis replica TCB ring, in silver (because I don’t like gold). 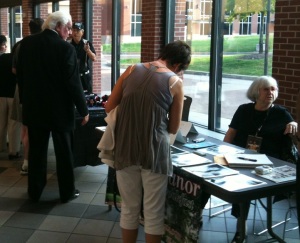 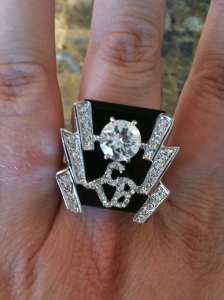 Around 7:40, they finally let us into the auditorium for the concert where Cowboy Jack Clement was to perform. Unfortunately, there were only five rows full by 8pm when the concert started – but I did get to sit right behind WS Holland! Very sad that more people wanted to see Elvis Tribute Artists at the Orpheum rather than a true legend such as Cowboy Jack Clement! Cowboy Jack Clement was the producer/engineer at Sun Studio who recorded Elvis Presley, Johnny Cash, Jerry Lee Lewis, Carl Perkins, collectively known as the Million Dollar Quartet on that fateful night in December (as well as U2 when they were there recording songs for Rattle and Hum). He is also a singer and songwriter. Tonight Clement sang three songs that he had written, two of which Johnny Cash made famous. The band consisted of Reggie Young from the Memphis Boys at American Studios who recorded with Elvis, Norbert Putnam who was Elvis’ session bassist, guitarist Billy Burnett who was in Fleetwood Mac and whose dad was in the rockabilly group the Burnett Trio, and drummer Jerry Carrigan.

My 2nd day of Elvis Week 2010 was great, even though it was Friday the 13th! I had a lot of fun at the Elvis Insiders event Shake Rattle and Bowl at the StrikeZone Bowling Alley in Southaven, MS. It was three hours of Elvis fellowship with great food, good bowling and great people – Elvis’ friends and Elvis’ fans.

Unlike last year, we weren’t lined up outside around the building. Surprisingly the small line was inside the front doors at 9:40am waiting to get inside the bowling alley. Once inside, I got my event laminate and immediately got in line for autographs because last year it was a long wait. But I noticed that after a half hour, only about 5 people were behind me. Not sure if it is the bad economy, the terrible heat, the smaller list of celebrities or the dislike of bowling, but it was definitely a much smaller crowd at Shake Rattle and Bowl this year. 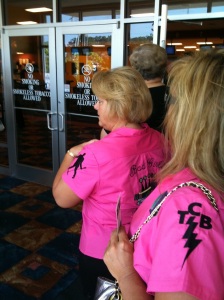 This year the celebrities giving autographs and posing for pictures were Chris Noel from my favorite Elvis movie Girl Happy, Joe Guercio Elvis’ musical director, Cynthia Pepper from Kissin Cousins, Ginger and Mary Holladay who sang with Elvis at the American Studios session in 1969. Cowboy Jack Clement was supposed to be there, but he had to unexpectedly return home. I was a little disappointed because I really wanted to meet him, but at least I got to see him perform the previous night. 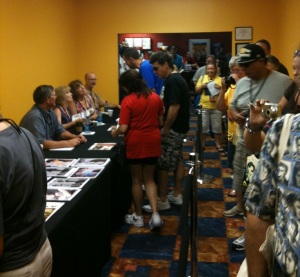 After my autographs, I ate a little food and drank some unsweetened iced tea – no sweet tea! I met some great people from Maryland, Canada and Ohio. Elvis fans are the greatest! It was a great time, even if it was less people than last year. I met some great people, had fun bowling, got some free stuff from trivia, then got into my hot hot car that said it was 109 degrees outside. Ah August in Memphis – it’s always the hottest during Elvis Week.

Saturday August 14th I spent the day at the Orpheum Theater on the corner of Beale and Main Streets for Conversations on Elvis (“Elvis on Tour” and “Elvis Presley’s Memphis”) and the screening of Elvis on Tour.

Conversations on Elvis: Elvis on Tour ran from 10 to 11:30am. First Ernst Jorgensen introduced awards for Elvis’ record sales. Then Joe Guercio, Elvis’ musical director, share some great stories about his time on tour with Elvis. Joe told the story behind the photo where Elvis is choking him: Joe had just told Elvis Jerry Vale said he could sleep at night knowing Elvis covered his song. 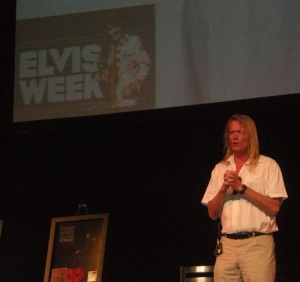 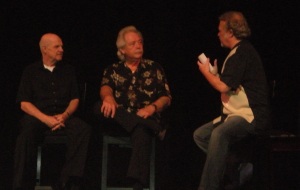 We were informed a cd of the Vegas Cirque de Soleil show Viva Elvis was to be released in November, and we heard a sneek peak of “Suspicious Minds.” Then Donnie Sumner and Bill Baize (of the Stamps Quartet who toured with Elvis in the 1970s) shared their stories on tour with Elvis. I had over an hour until part 2 of Conversations was to start, so I had a great lunch at the Majestic Grille.

Part 2 Conversations on Elvis: Elvis Presley’s Memphis ran from 1 to 2:30pm. First up was Michael Lollar, the author of the new book Elvis Presley’s Memphis (which I just purchased at the Back in Memphis event) and EPE photographer Robert. Lollar spoke about his times reporting on Elvis for the Commercial Appeal and Robert spoke about his photos in the book. Joe Espositio (Elvis’ close friend, tour manager and one of my faves who I had finally met the previous year in Vegas) was up next. Joe shared some of his stories about his time with Elvis and Elvis’ impact on the world, even today.

Next up was Memphis Police Office Earle, who met Elvis in the 1950s when Elvis borrowed a quarter from him. Elvis never paid him back and through weird circumstances or divine intervention, Earle became friends with Elvis years later and spent many nights at Graceland. Ernst Jorgensen returned to announce the release of the Elvis the Complete Masters, which contains every master recording (711 songs) plus over 100 bonus songs and a 200 page book (I bought it the minute it went on sale).

I had just under four hours before the screening of Elvis on Tour was to begin, so I went home (just a 5 minute drive) to eat dinner and let the dogs out and feed them. I was so excited for the Elvis on Tour (documentary from 1972) because I had been waiting so long for it to come out on dvd and finally my Elvis movie collection would be complete. And to watch it on the big screen in Memphis was quite exciting. Tom Brown hosted the screening and all the guests from Conversations were in the audience. 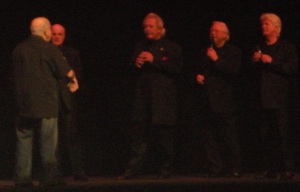 After watching a ‘making of’ segment entitled “Standing Room Only” and an introduction by Priscilla Presley, Elvis on Tour began. The sold out audience was really into it, clapping and singing along. After the movie, there was a brief intermission then the Stamps sang and Joe Guercio came out to lead them on one song! We gave them a standing ovation. And if that wasn’t enough, we were shown extra footage that is not included on the dvd or show anywhere, but we could not take photos or video. This event was by far my favorite of the week because it reminded me of Elvis Weeks past where every event was sold out and you could just feel the energy – everyone was having a blast!

Sunday August 15 was the annual Candlelight Vigil, the event Elvis Week was built around. Every year in Memphis on the night of August 15th, there is a phenomenon that is known as the Candlelight Vigil. Thousands of people from all over the world gather at Graceland paying their respects to the memory of Elvis Presley. They close Elvis Presley Boulevard and everyone congregates in the street and then with candles lit make their way up to the meditation garden to Elvis’ final resting place. Last night was the 33rd anniversary of Elvis Presley’s death, and the candlelight vigil was breathtaking, emotional and hot. 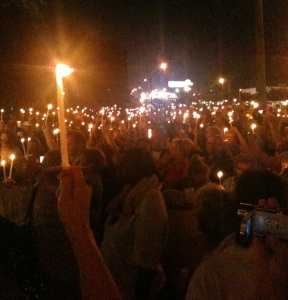 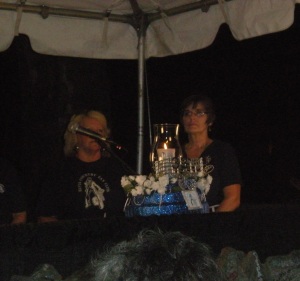 I arrived at Graceland just after 6pm and the heat index was 115 degrees. There were already a few people in line, but I took a seat inside the air conditioned ticket pavilion by the doors, so I could still see outside but stay cool as long as possible. I wanted to be with all the Elvis fans at Graceland, but not get up to the grave site until after midnight August 16th, the actual date of Elvis’ death. I walked across the street to the gates of Graceland at 8pm and got a front row spot for the opening ceremony to the Candlelight Vigil. We lit our candles at 8:30, they played “If I Can Dream” and then I cried.

Emotional and dripping, I went to cool off and have some dinner at the Chrome Grille. Nothing like veggies and sweet tea to make you feel refreshed. I watched George Klein’s interview with Marian Cocke, Elvis’ nurse, and Cythia Pepper, Elvis’ co-star from Kissin Cousins, and then I walked Elvis Presley Boulevard admiring the candlelight vigil art. 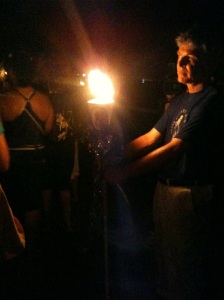 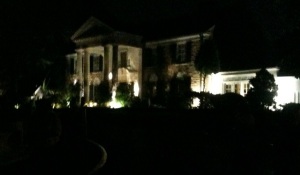 I got in line at 11:20pm. I only had about a half hour wait before I passed through the gates of Graceland, lit my candle from the eternal flame, and made my way up the driveway. About an hour and half later, I made it up the driveway to the Meditation Garden and paid my respects to the greatest entertainer and most beautiful person that ever lived, Elvis Presley.

Thank you @nkotb @donniewahlberg @dannywoodofficial @jonathanrknight @joeymcintyre Jordan Knight for an epic night in my home town!
NKOTB
NKOTB
Not a bad seat!
Donnie, Jordan and Jon thank us for coming out!
Ok for the next 30 hours or so it’s going to be all NKOTB for me with the meet n greet and show tomorrow night at Merriweather.