Saturday August 13th I attended the Sam Phillips documentary The Man Who Invented Rock and Roll at the University of Memphis hosted by Sam’s son Knox Phillips and author Peter Guralnick. It was a great documentary. I actually learned a few things I didn’t know, because quite honestly I could give the tour at Sun Studio I know the history so well. I love the quote that “Sam Phillips was his own best friend, and he loved his own company.” After the documentary, Sam’s son Knox and author Peter Guralnick told stories about Sam and Elvis. It was a great couple of hours. 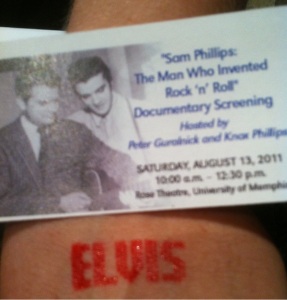 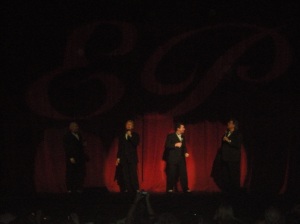 That night I attended Elvis Presley Live: The King in Concert at the Orpheum. I had not attended an Elvis concert in four years (since the 30th Anniversary concert). This concert did not have Elvis’ 1970s TCB band playing live in stage, but it was still fun. Almost like actually being at an Elvis concert, almost. The audience was really into it cheering and singing along. It was a fantastic show! Elvis’ conductor Joe Guercio introduced the show. When the curtain opened and the music started, the audience went wild. Elvis on stage, at least he looked as if he was on stage, with the band behind him. They used footage from Elvis ’69 performances in Las Vegas on a big screen that covered the entire stage top to bottom, but you could still see the live band behind it. I was so into the show that I forgot Elvis has been dead for 34 years and wasn’t really singing in front of me. From the screaming and cheering I heard, everyone in the audience agreed with me. In fact,  every time Elvis shook his hips the girls, I mean the women, squealed. At intermission The Imperials, the gospel quartet who toured with Elvis, performed a few songs.

Monday August 15th I attended the Candlelight Vigil. I arrived at Graceland just after 6pm because that’s when you can park for free and just before they shut down the road. I took my chair and cooler and secured a nice spot in the median on Elvis Presley Boulevard in front of the gates of Graceland. It was a beautiful night – cool for Memphis in August. It was great to be sitting in front of Graceland listening to Elvis music with people who love Elvis as much as I do. I saw my friends Kimberly, Rhonda, Lisa and Marr, as well as folks from the Elvis world Jack Soden and Ernst Jorgensen and popular Memphians Jack Oblivian and Kerry Crawford. 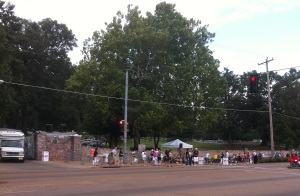 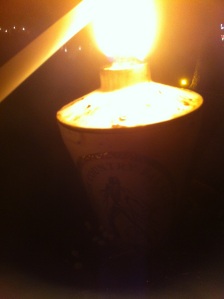 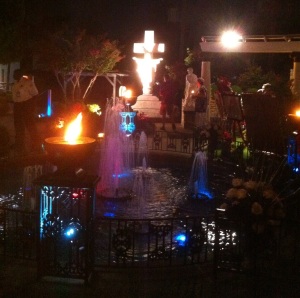 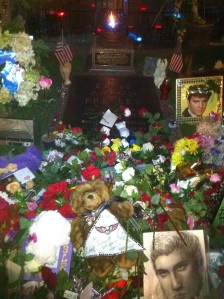 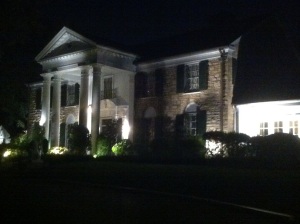 At 8:30, the opening ceremony began with a note from Lisa Marie Presley saying that she and Priscilla and the rest of the family would be in Memphis next year to celebrate the 35th anniversary. Then everyone lit their candles and sang along with Elvis’ “If I Can Dream” – “there must be lights burning brighter somewhere … out there in the dark there’s a beckoning candle.” After the opening ceremony, I watched the first people in line pass through the gates and make their way up the driveway to the Meditation Garden to Elvis’ grave. I walked around a bit admiring everyone’s Elvis sidewalk art and sat back in my chair for a few hours enjoying the night. I got in line at 11pm and was at Elvis’ grave at 1am.