June 15th will forever be known to me as Lisa Marie Presley Day, or LMP Day. I was lucky enough to see her perform twice in the same day and meet her. And because of Lisa, I met so many fantastic people.

me and Lisa Marie Presley

I started off my LMP Day in Annapolis at 11am. I arrived at Rams Head on Stage to find the band’s tour bus parked out front. I went inside and only one person waiting for Lisa Marie Presley’s Private Artist Showcase put on by the great radio station WRNR. I couldn’t believe there wasn’t a line of people waiting for this free, intimate performance. I won free passes to this event just by filling out a form on their website. By noon, a line had formed and we were still waiting outside. We were told that Lisa was late and we would be let in soon. I got a table right up front, and I mean literally on the stage. My knees touched the stage, which was very low. Lisa’s microphone was directly in front of me. She took the stage around 12:45, almost an hour after the show was supposed to start. When she walked out, she looked a little startled and as she sat down in front of me she said, “Wow, you’re so close!” After the opening song of Weary, she asked for the lyrics to the next song. A guy from WRNR gave me her cd to hand to her. Lisa said she doesn’t really look at them, but likes to know they’re there in case she needs them. Then she went on to say she was late because her bus was parked in Baltimore, so they had to drive her to Annapolis. She said she had no idea the two venues were so far apart – it’s at least a 30 minute drive, but more with the Sailabration traffic in Baltimore. Lisa then played Storm and Nails and closed with Over Me. I was singing right along with her on Over Me, as it is my favorite song off Storm and Grace, and Lisa spotted me singing (since I was inched from her face) and smiled at me. There was a huge applause from the 150-plus seated audience, and Lisa seemed really touched – she bowed as she left the stage.

Rams Head on Stage in Annapolis 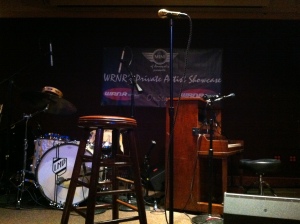 Couldn’t believe I was going to be this close to LMP?!

After the show, I made my way to Baltimore for Lisa’s second show of the day. There was lots of traffic on Pratt Street because of the Star-Spangled Sailabration in honor of the 200th Anniversary of the War of 1812 and the writing of our national anthem. The Blue angels flew right over my car while I was stuck in traffic. I finally made it to the Baltimore Soundstage, parked in a nearby garage, and had some pizza at Joe Squared down the street. After lunch, I walked down the street to see the Tall Ships and watch the Blue Angels practice. At 5:00, I made my way to the Baltimore Soundstage for Lisa Marie Presley’s show. My friend Joey showed up shortly after and Keith after him. We went inside at 7:00, and Joey and I were taken to our table front and center – the same exact spot I was in at the Annapolis show. Shortly after we were seated, I received a text from Lisa’s people saying I was chosen for a Meet and Greet after her show – so excited! The opening act was a local singer named David Tieff, who was really good. Lisa came on stage just before 9pm, she sounded wonderful, and the show was fantastic!!! Highlights for me were Over Me (my favorite song off Storm and Grace), Un-break (especially when Lisa played the drums), and Lights Out (her first single ever and represents Memphis to me). As the guys were breaking down the stage, I asked for a set list and got it. The set list for Lisa Marie Presley in Baltimore was as follows: So Long, Over Me, Weary, You Ain’t Seen Nothing Yet, Soften the Blows, Forgiving, Storm of Nails, Un-Break, Storm and Grace, Lights Out. 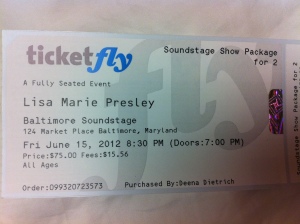 what Baltimore Soundstage considers a marquee 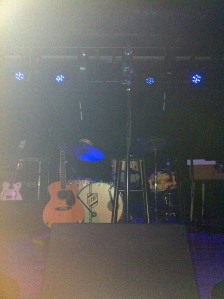 my view – same as the afternoon show

My front table and Meet and Greet bracelets

After the show, Keith, Joey and I made our way behind the black velvet curtain to wait for our Meet and Greet – with about 30 or 40 others. We waited for everyone else to leave and then we were taken to meet Lisa Marie Presley in small groups. We were last to meet her, which was kind of cool. As always, Lisa was SO nice and SO gracious and SO beautiful! I walked up to her, shook her hand and told her it was nice to meet her – she said, “Thank you.” I asked her to autograph my set list. And she was signing it, I thanked her for playing the show in Annapolis earlier that day. She said, “It was a crazy morning!” I told her there was another Rams Head right next door to where we were. She laughed and said, “Yeah poor planning.” Then I asked if I could take my picture with her, and she of course agreed. It was extra special to me that Lisa signed my set list because the first time I ever saw Lisa Marie Presley was also in Baltimore back in 2003. I got the set list then too, and she autographed it when I met her after the show then also. Basking in our excitement over talking with Lisa Marie Presley, we waited outside the Baltimore Soundstage and in front of Lisa’s tour bus. A few minutes later, Lisa walked out surrounded by a few security guards. People on the street ran up and surrounded her. She was nice enough to stop and pose for pictures with them and sign autographs. Then some crazy woman came up behind her and grabbed her throat. Lisa said, “UGH!” and shoved her arm off of her. Then they got her safely on her tour bus. Still excited by the night’s events, we stayed on the street in front of Lisa’s tour bus. A few minutes later, a car pulled up and Lisa’s husband and musical director Michael Lockwood jumped off the bus, ran to the car and pulled out their twin girls and quickly carried them back to the tour bus.

waiting for our Meet and Greet with Lisa Marie Presley

Lisa seems excited to talk to me 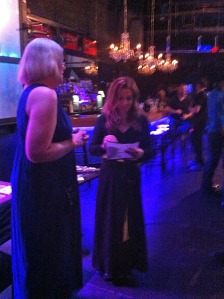 discussing the poor planning of the day

me and Lisa Marie Presley

my autographed set list from Lisa Marie Presley in Baltimore 6.15.12 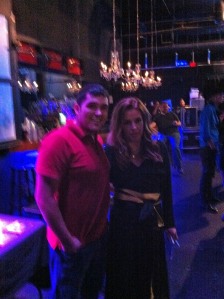 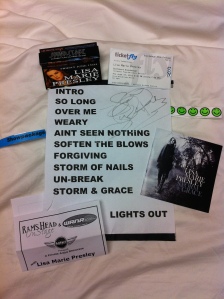 my stuff from my day with Lisa Marie Presley