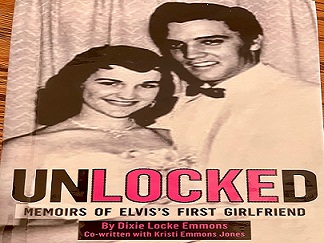 I have waited years for Dixie to write a book about her relationship with Elvis. Yes we have heard her story in other books and have heard her talk about her time with Elvis, but I wanted the complete story in a book written by Dixie. And now at last, we have it! Last week Unlocked: Memoirs of Elvis’ First Girlfriend by Dixie and her daughter Kristi was released, and my long wait was rewarded. It is great to have a perspective from someone who knew Elvis before he was ELVIS. Dixie writes about her relationship with Elvis while weaving in others’ perspectives of Elvis at that time such as stories from her childhood friend Betty, her sister Juanita and Elvis’ cousin Jimmy Gambill among others. Dixie reveals her own relationships with Elvis’ family (especially Gladys) as well as with Elvis’ friends such as Red West, George Klein and Sam Phillips’ family. Dixie also writes about her own childhood, her relationship with her husband and her friendship with Priscilla (which began Elvis Week 2002). Dixie begins her book with the sweet, fated love story of her parents that almost made me cry.

Dixie first met Elvis in 1953 when she was almost 15 and Elvis was 18. They first saw each other at the First Assembly of God Church, then several weeks later actually met at the Rainbow Roller Rink. After that, they were inseparable for the next few years spending time at Riverside Park, at the movies, at Charlie’s Record Shop, at church and at each other’s houses with their families. Dixie became very close with Gladys, and Elvis became like part of her family as well. Dixie and Gladys vowed to only buy Elvis’ clothes from Lansky’s after he returned a sport coat they had gotten for him from a high end men’s store downtown. A few years ago Graceland found Gladys’ purse that had never been uncovered. Inside was Elvis’ wallet that had Dixies’ love letters to him from the Spring of 1954. Dixie would write to Elvis while in school when she should have been doing her schoolwork. I couldn’t help but notice the foreshadowing of Elvis’ future hits in Dixie’s phrases like “You are always on my mind” and “I get so lonely when I’m not with you I could die.”

Dixie writes about one of he few disagreements she and Elvis had where she gave him back his school ring and then he threw it across the street. Although they spent hours looking for it, they never found it. I wonder what happened to that ring? Does someone have it today knowing it was Elvis’ ring or did someone find it shortly after it was lost and just claimed it as their own? Dixie tells about the time Elvis was turned down when he asked to join the Songfellows gospel quartet that included Cecil Blackwood. What would have happened if they had let Elvis join their gospel quartet? Would Elvis still had gone on to become the most famous and successful entertainer in the world? Dixie writes how Gladys was “tickled” at the girls screaming at Elvis and jumping on stage during that first performance at the Overton Park Shell. It has always been portrayed that Gladys was scared for Elvis and horrified at the girls’ behavior. It is nice to get a firsthand account of what really happened. Dixie would spend the night at Elvis’ house with his parents after attending Elvis’ shows and would help fix breakfast when Elvis arrived early in the morning. Then when Elvis started playing nightclubs that Dixie was too young to get into, she would babysit Bill Black’s kids during the shows. Everyone would come over to Dixie’s house after the show, and she and Elvis would stay up late talking while Elvis told her everything she missed.

Elvis took Dixie to her Junior Prom in 1955 at the Claridge Hotel, which for some reason I always thought was at The Peabody. Elvis had to drive back from his Louisiana Hayride performance the night before to make it back in time to take Dixie. I have always loved how close Elvis and Dixie are holding each other in that famous prom photo. From that photo, I had always assumed Elvis was wearing an all white tux, but his pants were black and his shoes were white. Dixie writes about how when they first started dating, everyone thought she was weird dating someone so different. Then after Elvis became famous, everyone wanted him and thought she was the luckiest girl at the prom. Dixie shares that she and Elvis never actually broke up, but by the time of her graduation a year later in 1956 she was in love with her future husband Bobby Emmons. Dixie had known Bobby since the second grade, but they didn’t start dating until her senior year. Elvis showed up on Dixie’s graduation day before the ceremony to take her for a bike ride, and she went with him. Then Elvis showed up again later that day after her graduation ceremony to take her out, but she went out with Bobby instead. Even though she and Elvis had always talked about getting married after she graduated high school, their lives were very different now with Elvis’ career taking off. They no longer had a romantic relationship, but Dixie and Elvis still had a love for each other as friends and stayed in touch (and Dixie also stayed in touch with Gladys). Dixie was there for Elvis when his mother died. Not only did she go to Gladys’ funeral, but she also went over to Graceland after and she and Elvis talked alone for hours (after Elvis cleared the house). That was the last time Dixie saw Elvis. And she did not go to his funeral in 1977 either.

This was a very sweet and honest book about Elvis and Dixie’s first love and great glimpse into Elvis’ life before he was famous. I read Dixie’s book in one sitting as it was only 170 pages, but a great, interesting read. To order Dixie’s book, please click here, and she will also be making an appearance during Elvis Week on August 17, 2021.