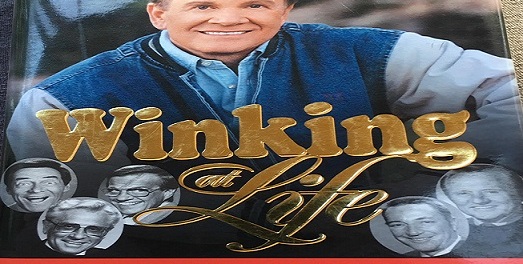 I have had Wink Martindale’s Winking at Life for a while. I think I got it around 2010 at the Rockabilly Hall of Fame in Jackson, Wink’s home town. It was the Jackson Rockabilly Festival flier in it that gave me the clue to the books origin. Originally I bought Wink’s memoir because Tic Tac Dough (a game show he hosted in the late 1970s and 1980s) was a favorite of mine and I really liked Wink and of course because his Elvis connection.

Wink moved to Memphis to work at WHBQ and was there the night Dewey Phillips played “That’s Alright Mama” for the the first time and met Elvis that same night when Elvis came in for his first radio interview. Wink was the host of Dance Party, which Elvis guested on in 1956.

I knew Wink’s wife Sandy dated Elvis, but I didn’t know Sandy was Wink’s second wife. I thought Sandy was dating Elvis in the mid 1950s, couldn’t deal with his lifestyle and left him for Wink. That was so not the case. Sandy met Elvis in 1960 and dated him a bit while dancing in his movies. Sandy did not meet Wink until 1971, after Wink’s 18 year marriage to his high school sweetheart (and they had four kids together) ended.

I loved all the many photos Wink included throughout his book about of his life and who he met. Over his years as a radio DJ, a television host and game show host, Wink met everyone – including two of my favorites Bobby Darin and Olivia Newton-John! And bonus Wink even knows Jerry Schilling! There is a photo of Wink, Sandy, David Foster, Linda Thompson and Jerry! Wink’s memoir was good, but it was mostly about his career. I would have liked more about Wink’s personal life. But it was a fun read.