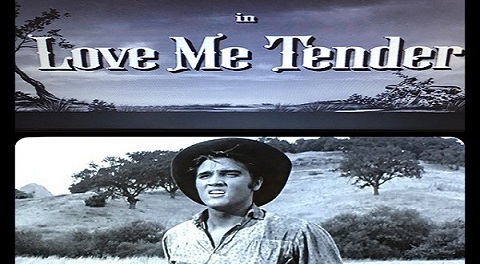 I was never a huge fan of Elvis’ first movie because I don’t like westerns, plus Elvis is only in about half of the movie. It is not a bad movie, just not my thing. It is definitely not in my rotation of 11 Elvis movies I watch all the time. I like all the love story / soap opera stuff, but not all the shoot em up western stuff. It is not one I re-watch all the time. But I was SO excited in New York City the first time I went as an adult to see the Paramount Theater remembering that HUGE Elvis banner for the premiere of Love Me Tender on November 15, 1956. Elvis was SO young with such a southern accent in Love Me Tender – he was just SO beautiful and innocent in it (and his hair was still his natural light brown). Elvis was no James Dean, but for his acting debut with no training he did a great job.

Even though Elvis had a contract with Hal Wallis and Paramount, they had no script for him so Elvis was loaned out to 20th Century Fox for his first movie, which he was paid $100,000. This was the first and last time Elvis did not receive top billing. Elvis’ first movie is one of the few Elvis movies that wasn’t really an ‘Elvis’ movie in that it was a movie with a real plot that just happened to have Elvis in it much like two of my favorites Wild in the Country and Kid Galahad, although he was the central character in those two movies. Unlike his later movies, Elvis is not in every scene in this one. In fact, Elvis does not even appear in the movie until 18 minutes into it. Love Me Tender was the biggest release at that time with 575 prints (typical was 200-300), and recouped its costs within three days of release. In its first week, Love Me Tender became the #2 movie right behind James Dean’s final film Giant. Love Me Tender ranked 23rd in movies for 1956, and it was the first Elvis movie to be shown on television in 1963.

Love Me Tender filmed for one month from August 20th to September 21st in 1956 on Fox Studios in Hollywood. During most of the filming, Elvis stayed at the Knickerbocker Hotel (1714 Ivar Ave, Hollywood) in Suite 1016 and then moved to the Beverly Wilshire Hotel in mid-September. (**Interesting Fact: Elvis left Memphis for Hollywood on August 16th for his first movie – so many critical events happened to Elvis on or around the date of his death**) Elvis was so excited he learned everyone’s lines in the movie. David Weisbart produced Love Me Tender, and he had also produced Rebel Without A Cause starring one of Elvis’ favorites (and mine) James Dean. Elvis enjoyed talking with Wesibart about Dean and even acted out a scene from Rebel. Weisbart went on to produce three more of Elvis’ movies: Flaming Star, Follow That Dream and Kid Galahad.

**SPOILER ALERT** If you have not yet watched Love Me Tender and don’t want to know how it ends, then stop reading now.

Love Me Tender (in regards to Elvis’ character) is about The Reno Brothers, which was the original title before Elvis’ song “Love Me Tender” took over the title. Clint Reno (Elvis’ character) marries Cathy (played by Debra Paget who Elvis had a crush on in real life) who was his older brother Vance’s (played by Richard Egan) girlfriend before he went off to war. Vance was presumed dead but shocked the family when he returned from the war very much alive. Cathy is especially shocked as she is clearly still in love with Vance even though she is married to his brother Clint. The irony is when Clint sings “Love Me Tender” in the movie, it is obvious the song is actually for Vance and Cathy not Clint and Cathy. After shooting his brother Vance in jealousy over their shared love Cathy, Clint dies from a returned gunshot. It was leaked to the public that Elvis’ character was going to die at the end of the movie and needless to say Elvis fans were not too happy with this outcome. To avoid bad publicity, Elvis was called back later to shoot an alternate ending where his character lived, but this ending was not used. Instead they compromised with adding Elvis as sort of a ghost singing “Love Me Tender” at the end of Clint’s funeral. This way fans were left with the image of Elvis singing rather than dying.

Elvis does not play a singer in Love Me Tender, but he does sing a few songs which really upset Elvis because he was told he would not have to sing in the movie. Elvis breaks into song just five minutes after his initial onscreen appearance. And a bit later on stage at the benefit, Elvis as Clint is literally doing the same thing he was doing in his concerts, complete with the girls in the audience screaming which is odd for the 1860s. Elvis was not allowed to use Scotty, Bill and DJ to back him up in the Love Me Tender, but he made sure they were backing him up in future movies like Loving You and Jailhouse Rock.

Elvis recorded three songs for the Love Me Tender ‘soundtrack’ on August 24, 1956 on 20th Century Fox Stage 1. Those songs were “Love Me Tender,” “Poor Boy” and “We’re Gonna Move.” Elvis recorded “Let Me,” the fourth song for the ‘soundtrack,’ September 4th and 5th in that same Stage 1 of 20th Century Fox – he also recorded another version of “Poor Boy” during those sessions. If you notice in the credits, it says all songs “by Elvis Presley and Vera Matson.” You don’t see that in any other of Elvis’ movies because Elvis felt it was dishonest, so he put a stop to it.

During the filming of Love Me Tender, Elvis appeared on The Ed Sullivan Show for the first time on September 9, 1956 singing “Love Me Tender” as one of his four songs. “Love Me Tender” was the first single of the time to go Gold before it was even released, the first time advanced sales for a single release had ever surpassed the million mark. It was #1 on the charts for four weeks. Elvis was still singing it 20 years later in concert. Sadly, “Love Me Tender” is not one of my favorite songs, but I did like it as the part of his 1970s concerts where he kisses all the ladies.

To read my take on all of Elvis’ movies, please click HERE.

Beverly Hills 90210 Marathon
It’s been 2 years and it’s still inconceivable ...
4 years ago today I spent 12 hours at Graceland on the Grand Opening of the new #Elvis Presley’s Memphis and we were the second ever Ultimate VIP tour AND it was when I saw my Joe Petruccio You’ll Never Walk Alone Jerry and Elvis painting being hung on the wall and decided to purchase it - after wanting it for 7 years
📚 re-reading Alan Fortas’ book 📚
Elvis Movie Sunday
one of my top 5 favorite movies!