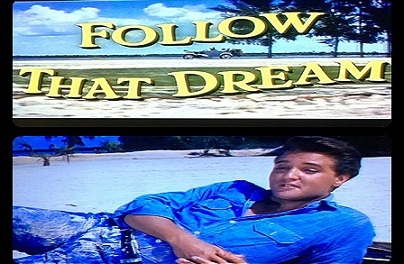 I was never a huge fan of Elvis’ first movie of 1962, but after watching Follow That Dream again recently I like it much better. It is still not on my rotation of 11 Elvis movies I watch all the time, but I can appreciate it now. I prefer the comedy of Blue Hawaii to the dumb, slapstick comedy of Follow That Dream. In the same way, I prefer Elvis’ ‘cool’ characters in his other movies to his country bumpkin Forest Gump like character in Follow That Dream, but he does a great job playing it and he is really funny. The bank scene is especially funny, and I literally laugh out loud when I watch it. (Did you notice Joe Esposito as a bank teller and Red West as a security guard?) Follow That Dream is a sweet, funny, albeit goofy, movie that I will watch more often now (as I have probably only watched it a handful of times). I have always liked the song “Follow That Dream,” as it is VERY catchy, and of course “Angel,” which could have been a single off one of Elvis’ ‘regular’ albums.

This first of two movies for United Artists, Follow That Dream was originally supposed to be directed by George Marshall. Gordon Douglas ended up directing the movie and was the only person to have directed both Elvis and Frank Sinatra. Douglas invited Elvis out for dinner during filming, but the Colonel put a stop to it. Follow That Dream was another Elvis movie produced by David Weisbert. It was based on the 1957 novel Pioneer, Go Home by Richard Powell. (I have this book, but haven’t read it yet.) Powell’s novel was published in an abridged form in Reader’s Digest. Richard Powell was not happy when he heard Elvis would be playing Toby, but changed his mind after he saw the movie remarking that Elvis “captured the character perfectly” and “he did a very good job.” The title for the movie could not be Pioneer, Go Home because composers of the title song could not come up with a word that rhymed with Pioneer. The movie’s title was then changed to What a Wonderful Life just before the start of location shooting. Other titles considered were It’s a Beautiful Life and Here Come the Kwimpers.

Charles Lederer, who was a part of Dorothy Parker’s Algonquin Round Table, wrote the screenplay. It wasn’t intended for Elvis until United Artists’ Walter Mirisch stepped in saying it was “an ideal vehicle for Elvis.” Unlike Wild in the Country, Follow that Dream actually closely followed the book it was based on. The theme of the movie is very anti-government, a “good-natured satire of libertarianism.” When they run out of gas on a new government highway not yet open to the public, the Kwimper family homestead on the beach claiming squatter’s rights on an unoccupied stretch of the highway opening their own fishing business. Gamblers move in next to them and mayhem ensues. Elvis of course plays Toby Kwimper the son recently home from the army, out on disability. A rarity in his movies, Elvis is not the focal point of each scene but rather a part of an ensemble.

Although both Tuesday Weld and Connie Stevens were considered for the role, Anne Helm played Holly Jones the family’s teen babysitter who moved in with the Kwimper family when her parents died and is in love with Toby. (Maybe life imitating art again as teenage Priscilla came to live with Elvis and his family at Graceland?) Elvis and Anne dated during filming. Anne says she was not a fan of Elvis prior to filming and did not meet him until they were on location in Florida. She said Elvis brought flowers to her cabin on her first day and they went for a drive and immediately hit it off. Anne said she “really fell for Elvis,” but she got tired of dating Elvis AND the guys. Joe Esposito tells a different story. He says their romance ended when Anne showed up on Elvis’ doorstep full of sleeping pills claiming she was pregnant. This proved to be false when her stomach was pumped at the hospital. Another source says their romance ended when Anne brought down a piano top on Elvis’ fingers after he said something to upset her. Who knows what actually happened, but I did find it interesting that Anne said Elvis’ relationship with the Colonel seemed warmer than with his father. In fact, she was shocked to learn Vernon was Elvis’ father after watching their reserved exchanges.

Joanna Moore played Alisha Claypoole, the state welfare supervisor who puts the moves on Elvis’ character Toby. According to Joe Esposito, Elvis and Joanna had a brief affair while filming in Florida. Joanna would become the wife of Ryan O’Neal and the mother of Griffin and Tatum O’Neal. She also played Peg the nurse on The Andy Griffith Show. Another actor who would go on to star in The Andy Griffith Show as Floyd the barber was Howard McNear, who played the Banker in Follow That Dream as well as star in two other Elvis movies Blue Hawaii and Fun in Acapulco. Arthur O’Connell played Elvis’ Toby’s father in Follow That Dream and would play his father again in Kissin Cousins. Roland Winters played the judge in Follow That Dream and Elvis’ character’s father in Blue Hawaii.

Location shooting for Follow That Dream began on July 6, 1961 and filming began on July 11 continuing through August 28, 1961. Locations shots took place in Florida in Crystal River, Ocala, Yankeetown, Bird Creek, Inverness and Tampa (the Colonel’s old stomping grounds). The studio had to actually build a beach and hauled palm trees into Crystal River. It was VERY hot in Florida in the summer. With temperatures over 100 degrees, Elvis had to change his shirt 22 times in one day. Interiors were shot in the courthouse in Inverness and a bank in Ocala. Many sources claim Follow That Dream was Elvis’ first movie (and one of the few) that was shot entirely on location, but other sources says some interiors were filmed at United Artists Studio in Culver City, California.

Elvis rode the bus to Florida while his friend Alan Fortas drove Elvis’ Cadillac limousine. Elvis’ friend Lamar Fike pulled Elvis’ new 21 foot Coronado from the back of the white Chrysler station wagon, which he parked in the sand causing it to sink up to its axles. Filming was delayed while it was removed. Elvis and his friends stayed at the Port Paradise Hotel, situated on a little lagoon out in Crystal Bay which opened up to the Gulf of Mexico. Each room had a little kitchen where Joe Esposito and Alan Fortas would cook Elvis breakfast each morning. In fact, they would purposely argue loudly while making breakfast as a way to wake up Elvis. Gambling was illegal in 1961 Florida, so they had difficulties obtaining two dice tables and other gambling equipment until one day a member of the Chamber of Commerce and a couple of anonymous gamblers showed up and saved the day.

On a day off from filming, Elvis visited Weeki Wachee State Park, north of Tampa, on July 30, 1961. At the time, it was one of the nation’s most popular tourist stops. Elvis visited these Natural Springs to watch the Mermaids perform in the Underwater Theater, which they did eight shows a day to a million people a year. Weeki Wachee is one of America’s smallest towns, but there were over 3000 people there on the day Elvis was there. Accompanying Elvis were the Memphis Mafia, costar Anne Helm, his father Vernon and his wife Dee. Vernon and Dee and her boys Billy, Ricky and David had been visiting Elvis on location in Florida. It was during this time, Dee told Elvis she was pregnant, but several months later she said had a miscarriage.

The late great Tom Petty lived near where they were filming Follow That Dream. He was 11 years old at the time. Petty visited his uncle on set and got a chance to to meet Elvis. Petty said, Elvis “stepped out radiant as an angel.” Petty was so taken with Elvis’ charisma and kindness, he traded his slingshot for a bunch of Elvis records. It was those records that inspired Tom Petty to become a musician as well as a lifelong Elvis fan.

Elvis gave a two-hour autograph party in Crystal River, which of course the Colonel had the town pay $10,000. Follow That Dream premiered in Ocala, Florida on April 11, 1962 and opened nationally on May 23, 1962. It peaked at #5 on Variety‘s Box Office Survey, but disappeared after just two weeks. It made $2.8 million and ranked 30th for 1962. Compared to the great success of Blue Hawaii, it was clear the ticket buying audience preferred Elvis in light hearted romantic comedies with lots of songs. Even though Elvis made $650,000. plus half of the profits, he supposedly hated Follow That Dream because he thought he looked fat.

The soundtrack was recorded at RCA Studios in Nashville on July 2, 1961 right before filming on Follow That Dream began. Elvis recorded six songs (and around 38 takes) in just three hours between 7pm and 10pm. Those songs were “Angel,” “Follow That Dream,” “What a Wonderful Life,” “I’m Not the Marrying Kind,” “A Whistling Tune” and “Sound Advice. The bit of “On Top of Old Smokey” was recorded on set and was too short to be released by RCA. “A Whistling Tune” was dropped from Follow That Dream and was rerecorded and used in Elvis’ next movie Kid Galahad. Even though it was in the movie, Elvis asked that “Sound Advice” be left off the soundtrack EP because he did not like it. It showed up later on Elvis’ 1965 album Elvis for Everyone. “Angel” and “I’m Not the Marrying Kind” also appeared on Elvis’ album C’Mon Everybody, “What a Wonderful Life” also appeared on “Got Lucky” and

To read my take on all of Elvis’ movies, please click HERE.