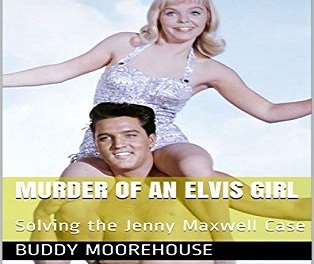 If you are an Elvis fan, you know Jenny Maxwell as the bratty teen, Ellie, in Blue Hawaii in 1961. You may also know she was murdered twenty years later, but her murder was never solved. Actually, this is not true. Jenny’s murder was solved a few days later, but it was never reported to the public. Even today 40 years after her murder if you google Jenny Maxwell death, you’ll see “In the afternoon of June 10, 1981, shortly after their separation, Maxwell and Roeder were killed in the lobby of her Beverly Hills condo during a possible botched robbery. She was 39 years old. The murders remain unsolved.” Buddy Moorehouse, Jenny’s cousin, writes about Jenny’s life and her death in his new book Murder of an Elvis Girl: Solving the Jenny Maxwell Case. It is a quick and interesting read showing what a small world Hollywood actually was with everyone’s lives intertwined.

** SPOILER ALERT** If you are planning to read this book, then you might want to stop reading now because I am about to divulge most of the details of Jenny’s life and death.

At 16 years old, Jenny Maxwell moved out to California to pursue her acting career after being cast in a television show. Even though she was their only child, her parents refused to move to California, so they let her go alone. A year later she was married to Paul Rapp, an assistant director. He was 21, and she was 17. A year later she had a baby named Brian. A year after that, Jenny was in Hawaii filming Blue Hawaii with Elvis. She was 19 and married with a baby. Jenny met Nick Adams on one of her jobs, and they happily discussed their mutual friend Elvis.

Jenny was too immature and selfish to be a mother, or a wife for that matter. Not knowing each other that long and being so young, Paul and Jenny fought all the time. He was very jealous, but also did not like Jenny’s partying ways. Paul would come home at night to find his baby home alone. Jenny would go out leaving her infant son alone in the house. Jenny went out drinking, getting high and cheating on her husband with one night stands. After Paul and Jenny divorced, she continued to leave her toddler son at home alone while she went out partying. Finally her own mother stepped in and told a Judge that Jenny was not a fit mother. Brian went to live with his father just giving Jenny a few visitation hours a week. Jenny had originally won custody because she didn’t want Paul to have her son, just out of spite. After her mother’s testimony, Jenny told her parents she hated them and didn’t speak to them for years.

Jenny then met ex-policeman now sleazy lawyer with mob ties Ervin “Tip” Roeder. No one liked Tip, but he and Jenny dated on and off for a while. During the next few years, Jenny finally matured and decided her son was important to her and she wanted him back. She made up with her parents, went before the same Judge telling him she would give up her acting career so she could spend more time with her son. It was then ruled Jenny was allowed to have her son at her house every other weekend. Since Jenny had given up her acting career and did not want to get a job, she decided to marry Tip Roeder in 1970. He was rich, twenty years older than her and friends with Nick Adams.

Jenny and Tip fought from day one. After a couple years of marriage, Jenny wanted to divorce him but she needed his money so she stayed. If she stayed married to him for 10 years, she would get half of everything, which was millions. After ten years, Jenny finally filed for divorce and got her own place. She had a procedure at the hospital and Tip offered to pick her up. Jenny let him as he had been nice to her lately. As they were going into her condo in 1981, Jenny was shot once in the head and once in the eye and died instantly. Tip was shot in the stomach, was taken to the hospital and died a few hours later. Only one reporter showed up and the police told him it looked to be a botched robbery and that Tip Roeder and his wife were shot, and that’s what the reporter wrote. He didn’t even use Jenny’s name in the article as she had yet to be identified – she was just ‘wife.’

Over the next few days, the police investigation proved this was not a botched robbery as they both still had their jewelry on and money in their wallets. What they did prove was that Tip had ordered a hit on his wife. He wanted Jenny killed, so he would not have to split his millions with her in the divorce settlement. The hitman was supposed to kill Jenny and just wound him so he would look innocent. Tip’s gunshot wound in the stomach should just have been a flesh wound, but it was more serious than intended and he died a few hours later. No one bothered to report the real cause of Jenny’s (and Tip’s) murder to the newspapers, so it was never made public and the original article about the botched robbery was the only thing in print. The hitman was never found, but Tip was definitely responsible for Jenny Maxwell’s murder. Tip may have also been responsible for his friend Nick Adam’s death, which was reported as a suicide or accidental overdose. Tip ‘discovered’ Nick’s body, so Nick’s family thinks Tip may have actually killed him or given him the drugs to kill him.

As if Jenny’s life and death wasn’t sad enough, the book goes on with another sad tale. Jenny’s son Brian not only lost his mother but also all of her money and her possessions. He got nothing. Because Tip outlived his wife, even though it was only by a few hours, all of Jenny’s possessions since she did not have a will went to him and when he died to his heirs. Tip’s daughters inherited all of Tip’s money, properties and possessions and all of Jenny’s. Brian asked Tip’s daughters for his mother’s things, but they refused. No money, none of her jewelry, nothing. Brian wasn’t even allowed to get his own bike that was at Tip and Jenny’s house.

Since this book was written by Jenny’s cousin, I would think (hope) it is accurate. As much as I did not care for Jenny, or rather her life choices, I really enjoyed the book as it was a very interesting read. I am glad Caroline brought it to my attention. It is available on amazon at https://www.amazon.com/Murder-Elvis-Girl-Solving-Maxwell/dp/B08W3M9YJ8/