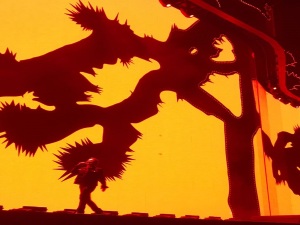 So after 30 years, I finally got to hear the song I was obsessed with in the late 1980s and early 1990s, “RED HILL MINING TOWN” played live in concert in Chicago – and I cried all the way through it. Oh I wish I could go back and tell my 14 year old self this, so I would not have been SO [continue reading] 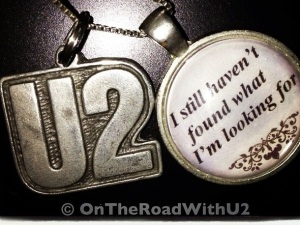 My love for U2 is pretty much known. Heck, I’ve even written a book about it – On the Road with U2: my musical journey. But for the few of you who don’t know, I have seen U2 in concert 90 times since the ZooTv Tour in 1992. I first fell in love with U2 back in 1987 with [continue reading] 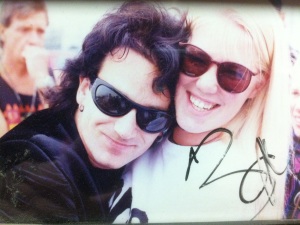 I have been an avid U2 fan since 1987 when I was 14. Some say obsessed, but I like to say passionate. I discovered U2 in March 1987 with the release of The Joshua Tree. I heard With or Without You and liked it. I realized U2 was the same group that sang that song Pride I had heard a few years [continue reading]

I love drums! I love drummers! When I listen to music, all I hear is drums and lyrics. That is what moves me – literally and figuratively. I am the one at the concert watching the drummer and not the lead singer or guitarist. When I first moved to Memphis, one of the first places I visited [continue reading]

I had a lot of fun in April blogging about 26 of my favorite things in the A to Z challenge. So much fun in fact that I wanted to list all of my favorites in this one blog post, each highlighted with links back to the original posts. I have also included some honorable mentions to truly include all [continue reading]

A favorite of mine that begins with U is U2, my favorite band. More than my favorite band, U2 is one of my greatest  passions. And as such, U2 has two shelves of memorabilia in my place as well as walls of posters and a display of hundreds of cds and dvds. My passion for U2 began 25 years ago. I [continue reading]

A favorite of mine that begins with L is Larry Mullen Jr, U2’s drummer. He is my favorite drummer, and my second favorite man – a close second behind Elvis. And ironically Larry is a huge Elvis fan and even named his son Aaron Elvis. I have been a U2 fan for 25 years. I was a freshman [continue reading]

A bit about the #ElvisMovie soundtrack. I love it! I did not like the Viva Elvis soundtrack or the duets or usually any cover or mash up of Elvis songs, but for some reason I love this soundtrack! And it’s not just because listening to it reminds me of the movie, which it does, but I liked the songs in the movie the first time I watched it. I thought the mixing of “Summer Kisses Winter Tears” with “I Got A Feeling in My Body” was brilliant! I mean no one ever uses “Summer Kisses Winter Tears.” Being an Eminem fan, I of course love Eminem’s “The King and I.” I love Stevie Nicks (and apparently Chris Isaak’s) “Cotton Candy Land.” And I absolutely adore Maneskin’s cover of “If I Can Dream!” I also love the use of Dogo Cat’s “Vegas” the first time Elvis is shown on Beale Street during the day, and Swae Lee and Diplo’s “Tupelo Shuffle” when Elvis is back on Beale Street at night. Now listening to the soundtrack at home outside of the movie, I’m really liking the other covers like Katey Musgraves’ “Can’t Help Falling in Love,” duets like “Power of My Love” with Elvis and Jack White and remixes like “In the Ghetto” featuring Nardo Wick. I also love the soundtrack just because it reminds me of the movie. I love that actual clips from the movie are included on the soundtrack the “Unchained Melody” and “Vegas Rehearsal / That’s All Right” sequences – and many of Austin’s performances. Like Baz said, the soundtrack is a souvenir from the movie.
🎥 a little Sunday matinee Troy Donahue double feature with A Summer Place and Parrish 🎥
***SPOILER*** #ElvisMovie
#ElvisMovie
Finally opening day! And this time I’m seeing it in supposedly amazing sound - maybe it will match the fantastic sound as the guest house screenings! This is the biggest poster I’ve seen in a theater!
SPOILER … so remember how Baz said stay until after the credits and you’ll get a surprise? Well we did at both showings in Memphis and saw / heard nothing (maybe we were talking and missed it). But I heard it Tuesday at the early access fan event then I recorded it tonight.