I went to Nashville Sunday to cheer on my Denver Broncos against the Tennessee Titans at LP Field in Nashville, just as I did 51 weeks ago. Unfortunately unlike last year, my Broncos lost 14-17 to the Titans. 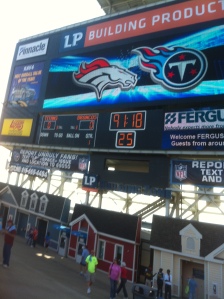 It was still a great game though, mostly because I got to see John Elway. I saw him come out of the tunnel and ran toward him. I got halfway down the stairs when the usher stopped me because my seat was not down in front. I tried to explain to him that it was JOHN ELWAY and I love JOHN ELWAY, but he didn’t let me pass. He did, however, laugh at me as I screamed and squealed and shouted JOHN JOHN JOHN! I was shaking and SO excited. I’ve been to games and have seen John Elway play 4 times in his career, but I have never been that close to him.

Unlike last year when I spent the entire weekend in Nashville (my birthday weekend), this year I just went to Nashville for the day. I couldn’t take the time off from packing for my move or spend the money to stay in Nashville overnight. Plus my mom was flying in to help me pack and move, and Southwest doesn’t fly into Memphis. I left Memphis 7am Sunday morning, parked at Big River Grille where I was meeting Mom after the game, walked across the bridge and was in my seat at LP Field by 10:30am. Of course I was dressed head to toe in Broncos orange, including my orange cowboy hat and orange Broncos jersey. The Broncos scored first, but the Titans quickly tied it up. The refs made a lot of bad calls in Denver’s favor. I forgot what big boo-ers Titans fans are. Mom texted at the end of the 3rd quarter to say she had landed and was in a cab on her way to Big River Grille. Denver was leading 14-10 and the Titans fans were getting ugly, so I decided it was a good time to leave. I walked back across the bridge and met Mom. We had a nice lunch, and I got to see the last quarter on tv at the bar. Denver lost 17-14, so I didn’t miss much. We left Nashville at 4 and were back in Memphis just after 7pm.

‪If you like to read about behind the scenes of #Elvis movies, Elvis: Frame by Frame by Bill Bram is one of the best books!‬ ‪#reading 📖 ‬
Got my ticket and VIP Meet and Greet for @toadthewetsprocket in Baltimore in July @mecupavilion will be fun to see gin blossoms too
don’t think it’s normal to be THIS happy to be in THIS place ... but who wants to be normal? #thursdaythoughts
Happy #MLKDay! Keep the Dream Alive!
Elvis’ Ring is now My Ring! On what would have been Elvis’ 85th Birthday, I realized one of my dreams of owning a piece of Elvis’ jewelry. Thanks to the Graceland Auction, I now own a silver ring with a malachite (green) stone that came from Elvis’ jewelry box he had in his room that Patsy Presley Gambill had. Patsy sold the jewelry box and its contents, including my ring, to Tom Salva in 1988 and Tom sold a few items in this year’s auction. My ring came with a notarized description from Tom, a hand written letter from Patsy Presley Gambills on Vermon’s TCB stationary and a letter of authenticity from Graceland. I messaged Tom as I am friends with him on facebook, and he had this to say about my ring, “Deena, Patsy told me that Elvis really liked green stones Jewelry. He felt that green was a healing color. Patsy told me that most of the things in the jewelry box were gifts from Family and Friends. When Elvis passed Patsy and her Uncle Vernon went up into Elvis' bedroom and removed a lot of things that were out in the open before the State of Tennessee came in and did an audit. They put everything in boxes and Vernon said bring the boxes home don't leave them in the Office, someone might take them. After a year she asked, "Uncle Vernon what do you want me to do with the boxes? Vernon replied, "Patsy just keep them as a memory of your Cousin." I have always wanted to own a piece of Elvis’ jewelry, ideally one of his rings, and now I do. It was more important to me to have a ring that was actually Elvis’ rather than one he gave to someone. The green stone in my silver ring is called Malachite, the “stone of transformation” and is believed to be a stone of balance “used for deep energy cleaning, bringing healing and positive transformation to the wearer.”