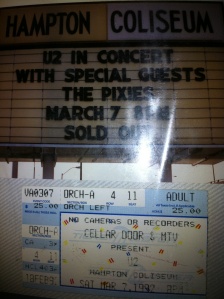 My musical journey on the road with U2 started 20 years ago today in Hampton, Virginia. It was Saturday March 7, 1992, and I was 19. My first U2 show was the fifth of the ZooTv Tour. On the morning of March 7th, my best friend, Cindy, and I drove four hours south from Ellicott City, MD to Hampton, VA. Back in those days, there was no need to get to the city of a concert a day early because there was no general admission – we had actual assigned seats on the floor. We checked into our hotel and immediately walked across the street to the Hampton Coliseum, even though it was hours before the concert was to start. We saw a small circle of people with a big microphone hovering over them. As we got closer, we realized Bono was in the middle of that circle! I didn’t speak with him, but got close enough to hear what he was saying to everyone else and to take pictures. For my first U2 show, I was seated in the fourth row in front of The Edge. Bruce Hornsby and Phil Joanou walked in from behind the stage and passed by us on their way to the soundboard. The Pixies opened. For the only time on the ZooTv Touraccording to U2gigs.com, “The Fly is played after Even Better Than the Real Thing and Mysterious Ways, rather than before.” The set list from my first U2 show was as follows: Zoo Station, Even Better Than the Real Thing, Mysterious Ways, The Fly, One, Until the End of the World, Who’s Gonna Ride Your Wild Horses, Tryin to Throw Your Arms Around the World, Angel of Harlem, Satellite of Love, Bad/All I Want is You, Bullet the Blue Sky, Running to Stand Still, Where the Streets Have No Name, Pride, I Still Haven’t Found What I’m Looking For, Desire, Ultra Violet, With or Without You. 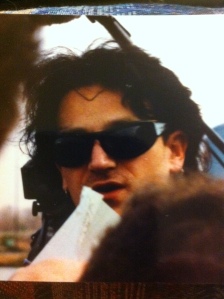 If you think you’re having a deja vu moment, you are. I also posted this on my On the Road with U2 blog. I just thought it was important enough to also post here because it was a HUGE day in my life.