A favorite of mine that begins with M is Memphis, my favorite city. I love Memphis so much that I moved there – twice. I have to admit that I originally became interested in Memphis because of Elvis Presley and my love for him. But after a while, I loved Memphis for Memphis. It just felt like home. The food is fantastic, the people are nice and it is the home of Elvis Presley. Memphis has such a rich music history. It is where rock and roll began, and it is the home of the blues. 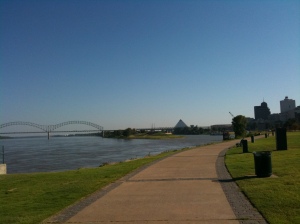 I lived in Memphis for a year from August 2002 to August 2003 and then again from July 2008 to October 2011. While in Memphis, I worked at the National Civil Rights Museum (where Martin Luther King was assassinated) and a couple of hotels and visited my favorite places Graceland (Elvis’ home) and Sun Studio (where Elvis, Johnny Cash, Jerry Lee and many others started) regularly. I wanted to live in Memphis because I wanted to live where I vacationed and where I loved. I moved to a house five minutes from Sun Studio and ten minutes from Graceland. I visited all the local museums, ate at all my favorite restaurants, got yearly passes at Graceland and the Zoo, and bought season tickets to the Memphis Grizzlies. I became friends with a great local singer named Nancy Apple. I attended annual local festivals and local movie screenings, such as Footloose, Johnny Cash’s America and Daylight Fades. I went to the annual Blues Ball, Who Shot Rock n Roll photography exhibit at the Brooks Museum of Art, the opening reception for the Elvis: from Memphis to Manhattan exhibit at Stax Museum, the famous HiTone music venue, the Arts Memphis Bravo season kickoff party featuring the Bluff City Backsliders, WEVL’s annual Blues on the Bluff featuring the BoKeys, Marshall Grant’s (Johnny Cash’s bassist) final performance and book signing at the Brooks Museum of Art, and the Memphis Roller Derby.

I took day trips to the Rockabilly Hall of Fame in Jackson, TN, the Clinton Presidential Library in Little Rock, AR, Elvis’ birthplace in Tupelo, MS, and the casinos in Tunica, MS. I visited Johnny Cash’s childhood home in Dyess, AR and Jerry Lee Lewis’ current home in Nesbit, MS. I spent a weekend in Nashville visting the Ryman, the Country Music Hall of Fame, and the Broncos win over the Titans. I took a five day road trip through Mississippi visiting the sights in Jackson, Biloxi, Vicksburg, Greenwood and Clarksdale. I took a ten day road trip out west along route 66 through Oklahoma, Texas and New Mexico then toured all around Texas on the way back visiting sights in Lubbock, San Antonio, Austin, and Dallas – and then Shreveport, LA. I finally made it to Chicago (and Wrigley Field), and have been three times since it’s only an eight hour drive from Memphis. Then of course there was the 3 month road trip back and forth across the America to all the U2 shows in the US. Besides all these wonderful places I’ve visited and great things I’ve done because I moved to Memphis, it was in Memphis that I discovered that I loved to write. I started this blog to share all of my activities and travels and then starting writing for Examiner.com about events in Memphis. This led to my second blog On the Road with U2 about all of my travels on the U2 tours, which led to me writing my U2 Tours Memoir.

What is your favorite city?

This blog post is part of my A to Z April Challenge – 26 of my favorites. Thanks for stopping by. I am also blogging the A to Z Challenge on my other blog On the Road with U2.

2 Comments on M is for Memphis – my favorite city