Last night was September 6th, the 17th anniversary of Cal Ripken Jr’s 2131st consecutive game when he broke Lou Gehrig’s record. It was also the night of Cal Ripken Jr’s statue dedication ceremony, which I had to witness for myself – and it didn’t hurt that my favorite Brady Anderson was going to be there. I love Cal – he played from when I was 9 years old until I was 29 years old. I cry when I re-watch the 2131 game. I have been to most of his big career events like 2130 when he tied the streak, when Cal ended the streak, his last game, and I was in Cooperstown when Cal was inducted to the Baseball Hall of Fame. So it’s safe to say that I love Cal Ripken, but not in the same way that I love Brady Anderson – just keep that in mind while you read this. 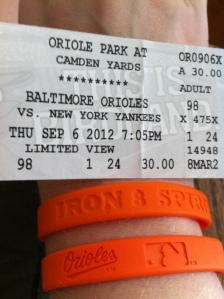 I took a half day off work yesterday, so I could line up and be one of the first people threw the gates for Cal’s ceremony – I knew Brady (as one of Cal’s closest friends) would be sitting up front. My best friend, Cindy, and I were parked in stadium lot C by 1:30pm. We walked past the warehouse at Camden Yards to find a group of fans waiting for Cal to arrive – hoping for an autograph. But there weren’t any fans lined up at the gates yet. Cindy and I walked over to Pratt Street Ale House where I had the IronMan Burger in honor of Cal – the yummiest bbq sauce! 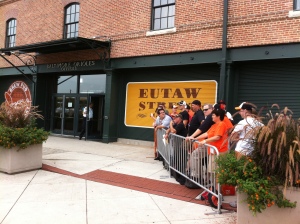 We were in line at the gates by 3:30, and there were a lot of people there. Highlights of Cal’s 2131 game was being shown on a big screen tv that was set up on the plaza. Just after 5pm, the gates opened. We grabbed our replica statue and ran toward the picnic area where the ceremony was held. I stopped at the first white tent and was elated that I had a front row spot on the rail for the ceremony. Then I realized I was at the wrong white tent. I was at the sound tent. I was confused because that is where Eddie Murray’s ceremony had been, but then I realized that the ceremonies take place next to the statues – duh! Someone shouted, “There’s Brady!” So I screamed/squealed and ran toward him. After being at the wrong tent and the Brady siting, we ended up in a spot to the left of the correct tent about halfway back. It wasn’t the greatest view of the stage, but I had a great view of Brady.

Fans were everywhere. People were lined up 10 deep all the way around the perimeter of the picnic area, as well as up in the seats on all levels looking down onto the ceremony. We were packed in so tightly that there was no air – I was sweating out my lunch. Inside the closed off seated VIP area, I found Brady – in the back where we were originally standing (next to the wrong tent). The seated VIP audience included Cal’s family (wife Kelly, mom Vi, brothers Billy and Fred), former teammates (Brady Anderson, Eddie Murray, Mike Bordick, Ken Singleton), current Orioles (Buck Showalter, Adam Jones, Mark Reynolds), and Lynda Carter (tv’s Wonder Woman) who is apparently a close friend of Cal’s.

Brady sat in the front row with Cal’s family, and he was the first to talk. During Brady’s speech, he cursed. He was talking about how he was injured and asking the trainer if he should play, and the trainer said something like “you don’t think Cal was ever injured?” And Brady replied, “what a dick!” It got a laugh and cheer from the crowd. Then Billy Ripken, who spoke next, commented that he “couldn’t believe Brady cursed in front of his mother.” Brady was embarrassed, but this again got a laugh and cheer from the crowd. Louis Angelos spoke next, and during his speech Brooks Robinson arrived. The crowd jumped to their feet and applauded. Cal leapt from the stage to embrace Brooks. When Angelos was finished, they unveiled Cal’s statue and then Cal spoke. Cal thanked Brady for his speech and said he did a great job considering he only had 24 hours notice. When speaking of his family, Cal got choked up and had to take a moment. After his speech, Cal posed with his statue and talked with his friends and family. I saw Brady talking with Wonder Woman (aka Lynda Carter). Brady starting walking toward us, but then made a b-line for the fans on the opposite end where we were originally standing – by the wrong white tent. Brady signed autographs and shook hands for a few minutes.

Cal and his statue 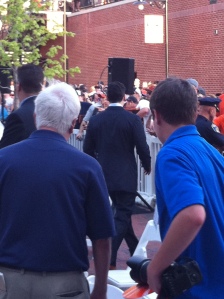 Brady walks past us to greet other fans 😦

About an hour later, there was another ceremony for Cal – a shorter ceremony that was on the field. And when they announced Cal and played that music and he was on the field waving and the fans were cheering, it felt like it did in 1995. And in the 5th inning, they showed highlights from that 2131 game 17 years ago on the big screen and then showed Cal in his box at the game last night. Cal stood and waved and the crowd cheered and cheered – and I cried. It was an amazing moment, an amazing night!

It seems that Orioles Magic has returned to Baltimore, after a 15 year hiatus. For the first time since 1997, the Baltimore Orioles are in 1st place in September – and are most likely going to the playoffs. You could definitely feel the Orioles Magic at Camden Yards last night for Cal Ripken Jr’s statue dedication ceremony and the Orioles 10-6 win over the Yankees.