The Americanarama Festival of Music arrived at Merriweather Post Pavilion last night in Columbia, MD with Ryan Bingham, My Morning Jacket, Wilco, and Bob Dylan. Most people were obviously there to see Bob Dylan, but there were also a lot of My Morning Jacket and Wilco fans. But sadly hardly anyone was actually there to see Ryan Bingham, except me and about maybe 30 people. But Ryan made fans out of the few who arrived early enough to see his short half hour set that started at 5:10.

I arrived at Merriweather just before 4pm to enjoy the gatecrashers free food. While there I got to listen to Ryan Bingham’s sound check. I got my VIP pass and went to the VIP deck at 4:30. After downing my $5 blue gatorade, I walked down to the GA section. I got a spot on the front rail on the left side of the stage. There were only about 40 or 50 people in that GA section at that time, a few people in the seats, and some on the lawn.

Ryan Bingham came out at 5:10 and played a fantastic set, although way too short at only a half hour. After, he signed autographs at the merch stand for about a half hour. I met Ryan, and he was so sweet and smiley with a great southern accent. I said, “It’s nice to meet you.” He asked my name and then said, “Hi Deena. I’m Ryan. Nice to meet you.” I told him I enjoyed his set and I was at his show at Rams Head in October. He said he loved that place. I asked him how his dog was, and he said ‘hot’. I told him I wanted to meet his dog, and I liked enjoy the pics of his dog that he tweets. After the line of people subsided, I went back up to him and asked to take a picture with him, which he graciously obliged. Then he said he had to leave because he was going to go jam with My Morning Jacket, who were already playing. 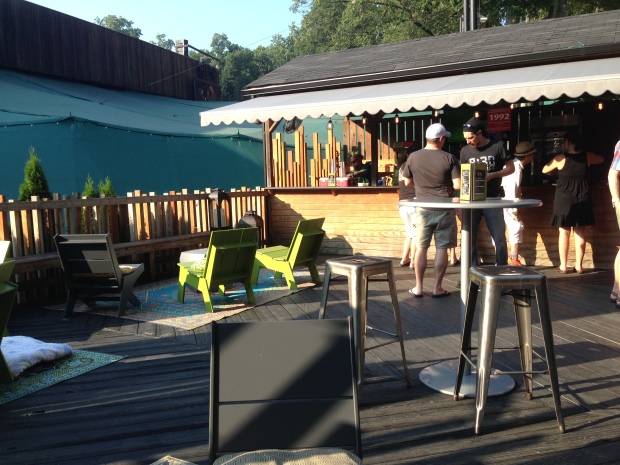 I went to the VIP deck and enjoyed a $16 bacon cheeseburger and bottle of water while listening to My Morning Jacket – and watching them on the monitor. At 6:30, I went back down to the GA section so I could see Ryan perform with them. The entire GA section was full, so I stood all the way at the end on the left of the stage. After a half hour, Ryan finally joined them on stage to sing and play on one song. It was great. When he finished, I went back to the VIP deck to relax. At 7:30, I left Merriweather without seeing either Wilco or Bob Dylan. I didn’t care about seeing Wilco and had just seen Bob Dylan in November. Plus I had a headache and didn’t feel like waiting another two hours for Bob Dylan to take the stage. My main point of going to this concert was to see Ryan Bingham. And I did more than see his set, I got to meet and get my picture with Ryan Bingham. I had a great time! It was very relaxing to hang out on the VIP deck and then go directly to the GA section, without having to walk all the way around through the field.

2 Comments on Ryan Bingham at Merriweather 7.23.13

"The fidelity of a dog is a precious gift demanding no less binding moral responsibilities than the friendship of a human being. The bond with a true dog is as lasting as the ties of this earth can ever be.”
1 week from today I leave for Memphis for Elvis Week 2021
Happy National Mutt Day!
52 years ago tonight #Elvis returns to the stage opening in Las Vegas July 31, 1969
#cool
Ugh! I went to the University of Maryland 16 years too late! We never had cool concerts like that when I went there. But at least I sat in Cole Field House many times (for basketball games) where the concert was. Sept 27 & 28, 1974