One week ago the Denver Broncos won the AFC West. One week from today the Denver Broncos will be in the Super Bowl – and I will be there! I thought I was excited last Sunday. It’s nothing compared to what I am feeling right now. My DENVER BRONCOS are going to the Super Bowl and so am I !!!!!! Excitement doesn’t even begin to describe what I’m feeling right now. I don’t care that is really cold or might snow. I’M GOING TO THE SUPER BOWL TO SEE MY BRONCOS!!!

The real planning for my Super Bowl odyssey started Monday, but in all honesty I’ve been thinking about it all season. And to be brutally honest, I was planning on it last season, but I won’t get into how my plans were thwarted and my heart was broken – it might be time to let that go. So in the back of my mind I knew if the Broncos made it to the Super Bowl, I would have to go because MetLife Stadium is only a four hour drive away. I even tried to book a hotel months ago just in case, but nothing close was reasonably priced. And after booking a hotel and flight last year for the AFC championship game that never was, I didn’t want to jinx it. (Yeah, really trying to let that go.) But this year the Broncos won the AFC championship! And Monday morning I was online searching for hotels, assuming I would have to stay at least an hour away. Somehow, someway I booked a room at a hotel at the Meadowlands for $120 a night through Expedia. I never book through Expedia, but they didn’t have this deal on the hotel’s site. In fact, I think this was the only room at this price. Other rooms at the same hotel and ones around it were going for $400 a night. I really lucked out with this. And my luck was just beginning.

I have stayed at Meadowlands hotels before for U2 concerts. Even if you can see the stadium across the street from your hotel window, you have to drive. There is no way to walk to the stadium because it is surrounded by highway. I emailed the hotel manager to ask if they would have a shuttle taking fans to the Super Bowl. He wrote back that shuttle drop offs are not allowed at the Super Bowl – and neither is tailgating. He sent me a link to the Super Bowl transportation and suggested I take the bus, train or buy a parking pass. My whole reason for staying at a hotel at the Meadowlands was so I would be close to the stadium and would not have to take public transportation from New York City, so I was a little annoyed. I bought one of the last parking passes (for $150!). Now they are going for $300 or more on eBay, so I feel a little better. Also, the bus passes are $50, so for two people that would be $100. So, I think I did alright in the parking situation.

Hotel – check. Parking pass – check. It was noon Monday and my Super Bowl ticket search began. I posted on Twitter and Facebook. I asked a few friends I knew who knew people who could get players’ tickets – every NFL player gets two tickets. I also asked a friend who had a friend who has Broncos season ticket. Then I searched all the usual suspects: Vivid Seats, Stub Hub, NFL ticket exchange and Prime Sport. They were all well over $2000, which was my absolute limit. A friend of mine said she saw tickets listed for $800. She sent me the link, but it was Craig’s list, which I have never trusted. I should have went with my first instinct. Several emails back and forth with the ‘seller’ and a call to eBay customer service revealed this was indeed a scam. The search continued.

For the next two days, I continued searching for tickets. Wednesday evening a friend of mine, Vincent Sharps, put me in contact with a client, Jenna Raglani, who had players’ tickets. I could have two tickets to the Super Bowl if I had cash or a cashier’s check the next day. That night I didn’t sleep much trying to figure out how I was going to get this money together and who would go with me who also had cash by Thursday morning. I awakened Thursday morning at 5am still planning out my Super Bowl experience. I had just enough money to buy my tickets, and by enough money I mean I had $2 left over. Luckily Friday was payday – plus the person buying the other ticket immediately paid me via papal. After a trip to the bank, I met Jenna in Catonsville for the exchange. I found out my tickets were Lardarius Webb’s tickets and I would most likely be sitting in the middle of a bunch of NFL players (assuming the rest of them don’t sell theirs). To hold those tickets in my hand – the excitement I can’t quite explain. Later that afternoon, I was interviewed by Kevin Rinco for CBS radio about my Super Bowl ticket buying experience – and overall fandom. It was just a quick interview that should air later this week.

I am all set for the Super Bowl. This is going to be a long week of anticipation. Barring a snow storm, I am driving up early Saturday morning to avoid the traffic on 95. I will most likely just hang out at the hotel and maybe hit any pre Super Bowl parties in the vicinity. I doubt I will go into New York City for the festivities. Sunday I will go over to the stadium at noon when the lots open and then head into the Fan Pavilion entrance at 2pm when they open. I will be live tweeting (and facebook posting) my entire Super Bowl weekend complete with pictures and videos. 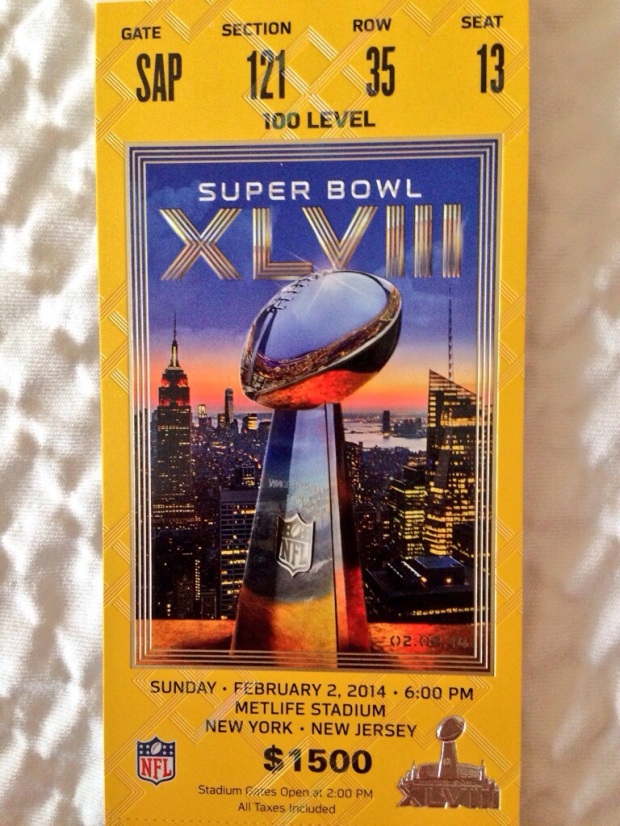