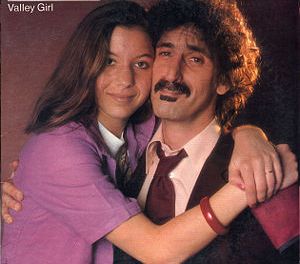 It’s, like, totally bitchin’ you came back to find out what my favorite Z’s are from the 1980s. Like the most righteous tv show, movie and music from the 80s.

Sorry, but I could not remember any television shows I watched in the 1980s beginning with Z (nor could I find any), so no tv on this post.

Zapped
I never saw Zapped, but it was the only Z movie in the 1980s I could find that I had heard of, and it starred Scott Baio (from Happy Days and Charles in Charge) and Willie Ames (from Eight is Enough and Charles in Charge). I don’t think I would like this movie, but it looks like your typical 1980s farce.

Frank and Moon Unit Zappa’s Valley Girl
I know I could have just said Frank Zappa for my favorite Z music from the 1980s, but I was obsessed with “Valley Girl” written by Frank Zappa and performed by his daughter Moon Unit. I had the 45 record and played it over and over. And we did walk around talking Val saying things like “Gag me with a spoon” and “fer sure” and “like oh my god I knooooow.” Sadly, I still know every word of the song to this day and can sing (uh speak) along to it flawlessly.

Thank you for joining me on my trip back to the totally tubular 1980s as I complete my Blogging from A to Z Challenge. What was your favorite tv show, movie and band or song from the 80s starting with the letter Z? And be sure to check out the 1970s from A to Z here.