In honor of Opening Day, I wore my Brady Anderson tee shirt. Only to realize that the Orioles opening day isn’t until tomorrow. Oh well. I’ve loved Brady since I was 16 when he came to the Orioles in 1988. I went to this terrible bar he hung out at on my 21st birthday, so I could meet him. And I did. I was at his last game as an Oriole at Camden Yards, which was Cal Ripken’s last game ever. I traveled to Cleveland in 2002 to see him play as an Indian against the Orioles and then went to the Indians series at Camden yards the following day to see him. He thought he was seeing double, seeing me in Cleveland and Baltimore in the same week. I met him in Cleveland and then in Baltimore. He said, “Didn’t I see you in Cleveland?” I said, “Yes, but I live in Baltimore.” I attended the luncheon when Brady was inducted to the Orioles hall of fame and met him there. The last time I saw Brady was in Cooperstown when Cal Ripken was inducted to the baseball hall of fame. Brady was warming up with the Iron Birds. I had my Cal and Brady tee shirt on and talked with Brady through the fence asking him to sign my shirt. He said, “If you take it off, I’ll sign it.” SIGH!

Baseball hasn’t been the same for me since 2001 when Cal retired and Brady was traded and then retired a year later. I just don’t have the same passion for it anymore. Actually my passion left back in 1997 when the Orioles lost in the playoffs. I was at every home playoff game that year. Something inside me broke at that last game in 1997. I still enjoy baseball, but don’t follow it as I used to. Watching old footage of the Orioles prior to 2001 makes me sad. It was such a great time and will never be like that again. I do enjoy going to Redbirds game now that I live in Memphis. And now I’ve ordered MASN because Brady is going to be broadcasting some Orioles games for them this season. Can’t wait! Play ball! 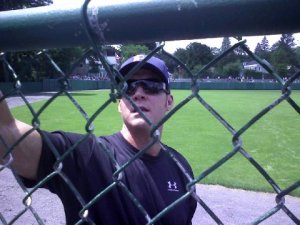