Tonight I finally went to two places I’ve wanted to go to for as long as I’ve lived in Memphis, which is almost 2 years now – Memphis Roller Derby and Memphis Pizza Cafe. I won free tickets to the Memphis Roller Derby from I Love Memphis herself Kerry Crawford, known on the track as Lady Problems. Thanks Kerry!

We arrived about a half hour before the first bout started. Found chairs on the end in the turn and didn’t get up until it was over. Didn’t really feel like sitting on the floor, although many did. The first bout was the Memphis Women of Mass Destruction vs. Nashville Lower Boards. Unfortunately, Nashville won. It was exciting though. The crowd was a little quiet during the first half, but were really into it once their beers kicked in during the second half. I didn’t know what was going on half of the time, but was excited when somewhen fell down. Is that wrong? We didn’t stay for the second bout Memphis Prisskilla Prezleys vs. Memphis Angels of Death. I so wanted a Prisskilla Prezleys tee shirt, but they were out of my size. Maybe next time. And there will definitely be a next time. I had fun. Great atmosphere, calm and laid back – anything goes.

We were hungry so we went to Memphis Pizza Cafe. And finally I found a great pizza place in Memphis!!! It was thin crust and cheesy and yummy! If only they delivered. 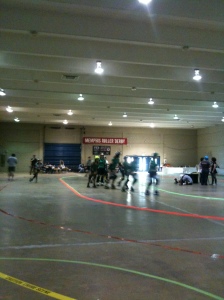