I went to the Juke Joint Festival in Clarksdale, Mississippi today. I listened to great blues, watched documentaries and took a tour of Clarksdale. 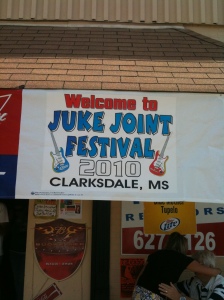 I arrived at the Crossroads just after 11am, so it was easy to get around downtown Clarksdale and I got a great parking space at the Delta Blues Museum parking lot. With my cowboy hat on, I walked down third street to the heart of the festival on Delta Street. It was hot in the sun, but cool in the shade. I made my way past Cathead and onto Miss Del’s General Store. 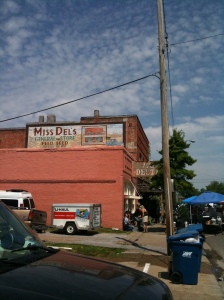 I stood across the street from the stage at Miss Del’s in the shade waiting for Valerie June to come on in about 15 minutes. But the band that was currently playing was really good and the crowd was really into it. I couldn’t see who they were because there were so many people around. During their last song the singer said, “I’m Stacy Mitchart.” I ran toward the stage and saw that this was the guy I just watched a documentary on yesterday. He’s a blue singer from Nashville. This was a very pleasant surprise! 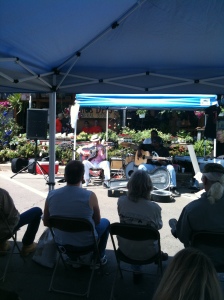 After Stacy was finished was finished, the crowd kind of cleared out. I was able to get a seat under the awning right in front of the stage – and in the shade. I was really excited to see Valerie June as she is from Memphis, and I have wanted to see her ever since I saw her on ‘5 Dollar Cover’ almost 2 years ago. She opened up with ‘Hound Dog’ and then ‘No Draws Blues,’ so I knew both of those. She also did a Robert Johnson song. Needless to say I really enjoyed Valerie June!

With my newfound love of documentaries, I didn’t want to miss the Juke Joint Film Festival at the Delta Cinema. Although I was probably the only one – well there were 2 other people in there. It was about 7 short documentaries by William Ferris. My favorite was one shot back in the 1970s with BB King and Son House and others.

I wanted to take the bus tour and learn about the history of Clarksdale. This event was much more popular than the film festival, as one guest had to stand on the bus. We started our tour at the original Greyhound Bus Station on 3rd Street. 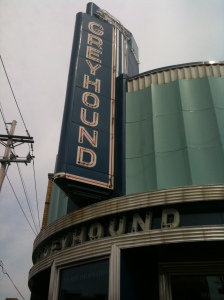 Our first stop was Tennessee William’s childhood home. I had no idea he lived in Clarksdale. And many of his characters, such as Blanche from ‘Streetcar Named Desire’ and Brick from ‘Cat on a Hot Tin Roof,’ were based on his neighbors. There is a Tennessee Williams festival in Clarksdale in October that I am definitely not going to miss.

We went by the Riverside Hotel where many musicians have stayed. Before it was a hotel, it was a hospital where Bessie Smith died.

It was a great day – outside listening to blues and learning history. Thanks Clarksdale!