Yesterday I went to my first Cooper Young Festival. It is a huge festival in the historic Cooper Young neighborhood with over 350 booths from artists, local businesses, festivals, organizations and lots of food and music. It was hot, around 95 degrees, but that didn’t stop the crowd of almost 100,000 from coming out to one of Memphis’ favorite festivals. 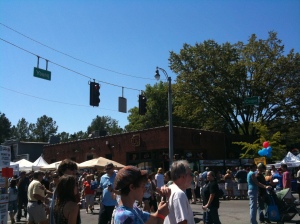 I went down early to find a parking space and to see Valerie June play before I had to work at the Indie Memphis Film Festival Booth. I left my house around 11am and was parked before 11:15. I lucked out! I found a spot on Cox, just 2 blocks off Young. My first stop at the festival was at Loudeen’s to buy my 38104 tee shirt and sticker – it’s the cool midtown zipcode (my zipcode). 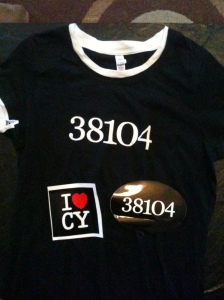 Valerie June was supposed to play at Java Cabana at 11:30, so I went there next. But no Valerie. I learned she was late coming from New York where she played last night. So I decided to relax on the couch in the air conditioning with an iced tea and wait for her, since I didn’t have to volunteer for another hour and a half. (Yes I was drinking iced tea in a coffee house)

Valerie showed up at noon, but by 12:30 she still wasn’t playing, so I decided to leave and walk around the festival a little before volunteering at the Indie Memphis Film Festival booth. Nancy Apple suggested I volunteer for Indie Memphis because of my appreciation for music, film and all things Memphis. Her boyfriend Aaron James was coordinating, so she put me in touch with him. I love just love Nancy. Besides being a very talented singer, she’s a great person who loves Memphis and dogs.

I got to the Indie Memphis booth just before 12:45 and thoroughly enjoyed promoting the Indie Memphis Film Festival, which takes place here October 21-24. My friend David stopped by to say Hi. Scott stopped by to introduce himself because we’ve talked on twitter several times. And I met Michael Smith, a videographer from Southaven. I just liked talking with all the people walking by enjoying the festival.

My shift was over at 3, and I was going home. I heard a little bit of Jack O on the way to my car, but I was too hot and tired to stop to listen. It was a great day at Cooper Young!

Please watch the video of my day at the Cooper Young Festival http://www.youtube.com/watch?v=um1PUNPYEQs

‪#BlackOutTuesday‬
This is such a great autobiography! Wouldn’t consider myself a Janet Leigh fan per se (although 2 of my favorite movies are Holiday Affair and Little Women), but this book is SO interesting. I don’t know if she’s that good of a writer or her life is just that fascinating - and I haven’t even gotten to the Tony Curtis stuff yet! #reading #janetleigh #books #hollywood #stayhome 📚
Sunday morning with Elvis #gospel @elvisradio19 #reading #elvis 📚 #sundayfunday #stayhome
Repost from @joey_paints - @kingjames said it best. “Do you understand now?” @kaepernick7 I don’t condone the violence in these protests , but I understand where the anger comes from. It’s time for justice. This America needs to no longer exist. #georgefloyd #minneapolis #riot #peace #vote #endracism #lebron #lebronjames #colinkaepernick #kaepernick