After almost 900 miles, 14 hours of U2 (including 360 concerts from DC and Vegas), one hour of sleep and lots of sweet tea, we’re back in the EC. That’s Ellicott City for those of you not from around here – Ellicott City, Maryland. We left our hotel in Abingdon just after 5am, stopped twice and were home before noon.

It didn’t get light out until after 7am. And route 81 north in Virginia is really dark – absolutely no highway lighting. Put up some lights Virginia! About an half hour or so north of Roanoke, we stopped at a Travel plaza. It was the coolest travel plaza ever! They had an Elvis quarter game. You know the one where you put the quarter in and it pushes them out. It played Elvis music too. 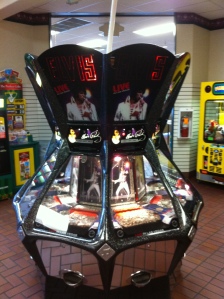 Elvis at the travel plaza

About 3 hours later, we were in Maryland getting my favorite Ledo’s pizza. I have been dreaming of Ledo’s since I was home in June. There is no Ledo’s in Memphis, and it’s a shame because it’s the best pizza in the world! So I stopped on the way home and picked up a large extra cheese. 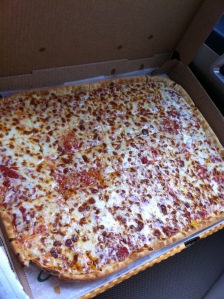 Elvis and Cilla were SO excited to see Mom (Dad isn’t home yet). They’ve had more snacks today then they had all week. They will definitely gain a little holiday weight. We’re exhausted and don’t plan on leaving the house until Tuesday. Please watch the video of day 2 of our roadtrip http://www.youtube.com/watch?v=ZQFbqdUMYXE