Today is Martin Luther King Jr Day. A day celebrating Dr. King’s birthday and his legacy. Wearing my U2 Pride MLK shirt, I spent MLK Day with the Memphis Grizzlies at the FedEx Forum. The Memphis Grizzlies were the first NBA team to have a MLK game, now everyone does. 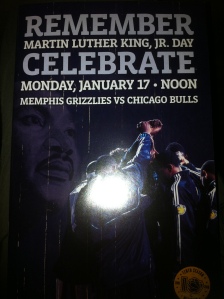 I went to the Martin Luther King Jr Day Sports Legacy Award Symposium honoring NBA greats Willis Reed and Lenny Wilkens and MLB legend Willie Mays. It was supposed to start at 10am, but it’s Memphis so it didn’t start until about 10:20. It wasn’t as crowded as last year’s symposium – maybe because it was at 10am in the morning. Willie Mays was such a character, very funny. While telling his stories he said, “laughter is therapy.” 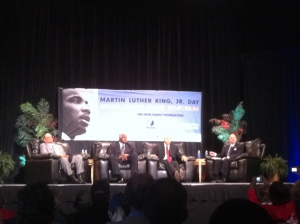 After the symposium was the nationally televised on ESPN Grizzlies-Bulls game at noon. But before tipoff, Willis Reed, Lenny Wilkens and Willie Mays actually got their MLK Sports Legacy Awards from the National Civil Rights Museum. FedEx Forum was probably about 3/4 full, but it was a quiet crowd – and an ugly game. Grizzlies lost to the Bulls 84-96. But the halftime show was great – the fantastic Mavis Staples performed! 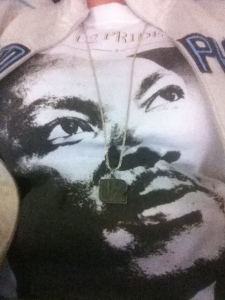 Pride, in the name of love

Please watch my video of MLK Day with the Memphis Grizzlies http://www.youtube.com/watch?v=nbdqZ759NqY