I have loved Brady Anderson (a close third behind Elvis Presley and Larry Mullen) for over 23 years. I have met him many times and gotten his autograph, but have never gotten my picture taken with Brady – until today. I went to the Orioles FanFest today because I knew Brady would be there. Although I didn’t feel the need to buy an autograph voucher for $15, I just figured I would somehow see Brady and get my picture with him. Just a few minutes after arriving at FanFest, my friend spotted Brady walking by. So of course I ran after him and followed him to the photo booth. I walked right up to him, we locked eyes and I said, “Brady! Hi!” He smiled and said, “Hi.” I said, “Are you going to be posing next?” He said, “Yes, posing, stripping, whatever.” Big sigh! I got in line and over a half hour, I finally got my picture taken with Brady Anderson! I walked up to him and he said, “If you’re taller than me, I’m not going to take the picture.” I offered to squat down, but he laughed and said it was ok. I then told him I had been a fan since 1989, I was very glad he was with back with the Orioles, and I looked forward to seeing him at the stadium. He said, “Thanks. That means a lot.” I was shaking and sweating for several minutes after, but at least I didn’t cry like I did after Larry hugged me. 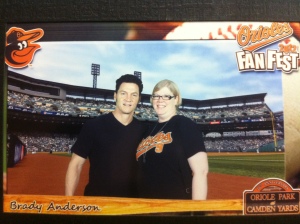 me and Brady Anderson Orioles FanFest 2012 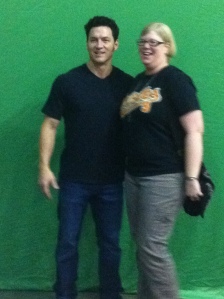 A very pleasant 509 mile drive with little traffic and little rain in just over 7 1/2 hours. In Knoxville for the night - on to Memphis in the morning!
and we’re off!
Remembering James Dean on the anniversary of his death
Happy heavenly Birthday Olivia … September 26, 1948
watching A Jazzman’s Blues 🎥