I had a great time at my 3rd Annual Baltimore Orioles Social Media Night. It wasn’t as crowded as the previous years, but Orioles Closer Zach Britton was much nicer than Adam Jones was last year. And Orioles Beat Writer Brittany Ghiroli was wonderful as usual. Orioles announcer Ryan Wagner hosted the event and The Bird of course made an appearance.

I left work at 4pm and was parked at the Hilton right across from Camden Yards by 4:40. The gates were to open at 5pm. I walked over to Eutaw Sreet and saw a sea of Blue and Orange. Normally I love this (Broncos), but this was for the Mets. And I did not like their Baltimore Invasion shirts. There were about 700 of them taking up two full sections. This was all thanks to comedian Jim Breuer. And we thought we hated the Yankees – wow!

They let the fans there for the Social Media Event in early at 4:45 and through a special gate – around the side of the warehouse. We quickly got into the Yard, registered, got our two free tickets and Zach Britton Social Media Night shirt and head up to the Roof Deck Bar above center field. Unfortunately this year my free drink ticket did not include wine, so I drank bad beer but it was in a cool orange Orioles can. This year’s buffet included hot dogs, hamburgers, baked beans, cole slaw, old bay chips, watermelon and cookies. I made a plate of just a cheeseburger and chips and took my bad beer to my seat, well a stool actually. I opted to stay in the centerfield roof deck for the game, buying a ticket for a stool in the front row dead center field with a nice view overlooking the bullpen. During batting practice, U2’s “Invisible” was played and later Elvis’ “CC Rider.” I was VERY excited! 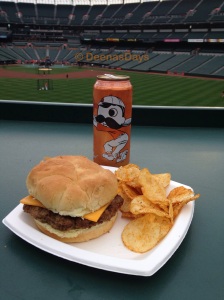 Zach Britton arrived around 5:10 and stayed until about 5:30 when he had to leave for a meeting. He answered questions from Twitter and from fans who were there. Personal fun questions as well as questions about baseball and the Orioles. He was friendly, good-natured and very positive – a stark contrast to last year’s Adam Jones “my favorite place in Baltimore is the airport so I can leave” and “why don’t you all cheer louder since we’re in first place” comments. I really impressed with Zach – he seems like a great guy. Brittany Ghiroli arrived shortly after Zach left and entertained the fans until about 6pm. She always has a great energy. The Oriole Bird joined us, and there was a raffle with great autographed items such as photos, magazines and a jersey – I won nothing.

Around 6:30 the grounds crew put the tarp on the field even though it was not raining. I decided to go get a seat at the bar under cover should it start raining before everyone went under there. I ran into Angie so we talked for a bit. I watched the pregame show on MASN where they showed a video from our Social Media Event. At gametime at 7pm the tarp was still on the field. We were in a rain delay even though it wasn’t raining. In fact it never rained. The game didn’t start until about 7:50pm. I went back to my stool, which by the way you can’t hear the stadium announcing from up there – just the masn tv broadcast. The first batter hit a homerun and that pretty much set the tone for the night. The Orioles lost 5-3.

Please click here to see all of my photos from last night.