I had a blast yesterday with my best friend Cindy at the Horseshoe Casino in Baltimore for Shannon Sharpe’s appearance. I got an email from Horseshoe last Sunday announcing Shannon Sharpe was going to be at the 14Forty Bar at Horseshoe doing the pregame commentary and halftime commentary of the Ravens – Raiders game at 4pm. There was also a chance to win a viewing party with Shannon on the mezzanine level of the bar with free food and drink and autographed memorabilia. I really didn’t care about any of that. I just wanted to meet Shannon, as he is my favorite NFL player (along with John Elway) and number five on my guy list (right after Elvis, Larry, Brady and Jordan). I’ve met Larry Mullen, Brady Anderson and Jordan Knight (and Elvis’ friends and family – not my fault I didn’t meet Elvis, I was only 4 when he died) and now I must meet Shannon! I have had a few near misses over the years. When Shannon played for the Ravens, I would arrive early and stay late to meet the players but never met Shannon. One time after a game when Shannon walked right by us while the other players were signing autographs, I sort of chased after his car (yeah don’t judge). Then another time before a game, it was a mob scene and I just couldn’t get close enough. At an away game in Philly, I saw Shannon get off the team bus and he waved at me, but did not come over. So this was finally my chance to meet Shannon!

Cindy arrived at my house a bit early (unusual for her, but welcomed), so I wasn’t quite ready. We left just before noon. We hit traffic on 295. It was construction merging everyone into one lane, even though we never saw any actual construction going on. While stopped in traffic, the car next to us was motioning, so I put my window down thinking my car was on fire or something. Then he yells, “On the Road with U2? Is Bono in the backseat?” I forgot my car magnet was still on the back of my car advertising my U2 book and blog. I yelled back “No, I wrote a book about my U2 travels. You can buy it on amazon‬.” We finally arrived at Horseshoe just before 1:00. The drawing to meet Shannon was at 2:45. We had to enter and then gamble because we got an additional entry to the drawing for every 25 points we earned. 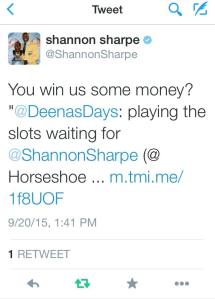 Once inside Horseshoe, we immediately swiped our cards at the promotional kiosk and found we were entered into a drawing for a 55″ television, not the Shannon Sharpe Viewing Party. We went to the Total Rewards desk to inquire. We were told to go downstairs to the promotions area. We went downstairs and swiped our card again, but it said we were already entered. Frustrated, we decided to take a break and play the new Big Bang Theory slot, which was a lot of fun! As we were walking around, we saw this guy at a small desk on the back side of the 14Forty bar where Shannon was going to be. I asked him where we entered the drawing, and he said “right here!” Well, that was easy – geesh! Cindy and I each had our one entry and then played more slots and each added four additional entries. We were sure to win. Besides, no one there wanted to meet Shannon more than I did! While playing, I tweeted “Playing the slots waiting for Shannon Sharpe” and Shannon tweeted me back saying “You win us some money?” US?! I was freaking out! So I tweeted back saying “I’m trying baby! see you soon!” and Shannon tweeted me back with the thumbs up emoji and an emoji I can’t see because I don’t have the new update – so who knows what he said to me?! I didn’t win any real money, just a few bonuses but continued playing so ended up losing the money I won at Maryland Live a couple weeks ago.

At 2:45, Cindy and I went to 14Forty for the Shannon Sharpe viewing party drawing, but we did not win. I stayed at the bar to await Shannon’s arrival and pregame commentary at 3:30. Cindy went to play the slots, but not before lecturing me on how I couldn’t be my usual loud self because we are inside a casino, not at the stadium – she knows me so well. Around 3:20 in walks Shannon flanked by five guys. They walked him in from valet parking. I knew they would do that. I had stayed around that area all day so I could maybe run into him and a picture with him. But when I saw him, it is as if my feet were in cement. I couldn’t move – I didn’t even take a picture from where I was. I just watched as Shannon and his entourage walked into the bar, up the stairs, behind the stage and then up the stairs to the mezzanine level. In spite of Cindy’s warning, I did yell Shannon’s name (but

not my typical Larry/Brady ear piercing screech). Shannon turned and waved to me. People who won the viewing party with Shannon started showing up, and they were not big Shannon Sharpe fans – they were barely football fans. They were probably more interested in the free food than meeting Shannon Sharpe – not that I was bitter or anything. In fact one guy came and got his autographed football and left. He said he wasn’t staying because he wasn’t a Ravens fan. WTH?! We asked if we could take his place at the viewing party, but they would not let us. Had I known this ahead of time, I would have taken that guy’s wristbands for the viewing party and given him the autographed football. Around 3:35 Shannon took the stage for his pregame commentary. I was VERY excited – big applause and shouts from me! But there weren’t many people there, maybe around 10-20 people. When the game started and Shannon walked back up to the mezzanine level for the private viewing party, Cindy and I went to Guy Fieri’s for lunch – and we were VERY bad. We were VERY hungry, since we hadn’t eaten all day, so maybe we over did it a bit (uh a LOT!) but it was REALLY good!

After lunch, it was almost halftime (yeah that’s how much food we ate), so we went back over to the 14Forty bar to wait for Shannon’s halftime commentary. I took a few more pictures upon his arrival and then we decided to leave. We went back upstairs because that is the level we were parked on – the garage entrance is on the upper level and the valet is on the lower level. Cindy decided she wanted to play just one more slot, so I stood on the upper level of the bar looking down at the stage to watch Shannon and take more pictures. (14Forty is a multi level open bar seen from both levels of the casino.) Cindy returned and Shannon was about to wrap up, so we just decided to stay for the end. When he was finished, he did not go back to the viewing party on the mezzanine level. Instead he started walking towards the stairs to leave. I ran to the escalator to get back downtstairs to where we just were! But it took too long and by the time I got there, Shannon was no where in sight. If we had stayed there, we would have been there when he left – he would have walked right by me. Another near miss of meeting Shannon Sharpe! But at least he tweeted me and waved to me – and Cindy and I had a great day together at the casino!

To see all my photos from my day with Shannon Sharpe (oh how I wish that was true), please click here.

📚 Haven’t even left the house yet and this is what I’ve gotten so far …
Graceland Sunset
#cozy 📖 ☕️
Goodnight from outside of Graceland.
Perfect day to curl up with a good book 📖
🎥 Our Elvis Movie Marathon continued today with Loving You, It Happened at the World’s Fair, Fun in Acapulco and Kissin Cousins.