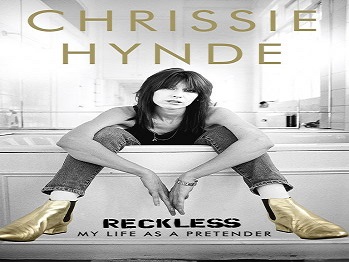 Ninety-nine percent of the books I read are non-fiction – autobiographies, memoirs, biographies and histories. I am currently reading Chrissie Hynde’s memoir Reckless: My Life as a Pretender, and I am truly enjoying it. I have never been what I consider a real fan of The Pretenders (because to me fan means fanatical), but I have always liked them – I don’t change the channel when their songs come on the radio. I even went to see The Pretenders back in the early 1990s at the now defunct Hammerjack’s in Baltimore. So not being a huge fan of The Pretenders, I am surprised how much I like Chrissie’s book. Actually I am more surprised how much I have in common with her. Besides the drug use, I could have been Chrissie Hynde before she was famous. She was such a fangirl. Then I read that U2’s manager Paul McGuinness also managed Chrissie for two weeks, and Chrissie was the one who recommended U2 cover CCR’s “Fortunate Son.” Learning that Chrissie Hynde is my music fan soulmate makes me wish I would have been a huge Pretenders fan years ago.

Below are my thoughts on some quotes I identified with in the first half of Chrissie’s memoir. (I haven’t even gotten to the part where she’s a Pretender):

“Those onstage were automatically ten times sexier than anyone in the audience.”
– I completely feel that way about the bands I see in concert – way more interested in them than the guys in the audience.

“But I was happy with my relationship with guys on records, in bands.”
– I have actually felt this way my entire life, which is probably I am still single. As a teen, I was also more obsessed with Larry Mullen (of U2) than the guys I actually knew – and kind of still feel that way today.

“An attractive trait to me in theory, but a pain in the ass to deal with.”
– This pretty much sums up every guy I have ever dated. The very traits that attract me to men are the same traits that make it impossible for me to actually be with them, but you can’t help who you’re attracted to. Since I have never been able to reconcile this, I remain single rather than settle for a man who is easy to be with even though I am not attracted to him or stay with a man I am attracted to who is difficult to be with. I would rather be alone than pick one of those two choices.

I highly recommend Chrissie Hynde’s Reckless: My Life as a Pretender, especially if you are a music fan.

18 inches donated to Locks of Love
1 week from right now I leave for MEMPHIS!!!
Elvis Movie Sunday with Kissin' Cousins
#reading #elvis #guesthouse ⚡️
16 years ago today on May 1, 2005 I was front row on the rail for Lisa Marie Presley at Beale Street Music Festival!
A great book I just finished.