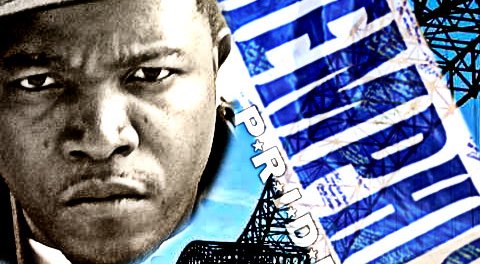 On this Music Monday, I wanted to write about Al Kapone to make sure everyone knows how great his music is – and to find out how popular he is outside of Memphis. Have you heard of him? If not, please keep reading and check out my video at the end of this post. If so, keep reading anyway because I had a fun story about him. Al Kapone is a great rapper from Memphis and probably best known nationally for his music in the movie Hustle and Flow. I love Al Kapone’s passion for his music and his city – MEMPHIS!  Al Kapone is also a great guy who I tweet with often. Being from Memphis, Al Kapone is a huge Grizzlies fan and often performs at the games  – and his song “Whoop That Trick” has become a bit of a Grizzlies’ anthem.

Even though I’m a big fan, have all his albums, and lived in Memphis for four years, I’ve only had the pleasure of seeing Al Kapone perform in concert once. It was at the 2013 Beale Street Music Festival in Memphis. He and I were supposed to meet before his performance, but he was running late so we decided to meet up after his set. I got there early so I could be up at the front rail, just left of center. Al Kapone’s performance was so great! He had a band and dancers and Mucky Sticky and Alexis Grace joined him on stage for a few songs.  He sang my favorites “We On Deck,” “Memphis Pride,” “Get Crunk Get Buck,” and “Whoop That Trick.” After his great performance, Al Kapone tweeted me saying they asked him to do a 30-minute set on the next stage and we could meet up after. He said he wouldn’t leave until we took a picture together. So I walked back through the mud to the next stage and again scored a spot on the front rail for Al Kapone’s second performance of the day. That second performance was even more energetic than his first. After his set, I waited about 45 minutes but I didn’t hear anything so I left around 6:30 to meet some friends on Beale Street. Al Kapone tweeted me about 9:00 apologizing for not being able to meet with me – he had to do a television show across town. To make up for it, he sent me an autographed t shirt and promised to meet with me the next time I was in Memphis. Great guy! Enjoy this video of his great performance at the 2013 BSMF.

No other place I’d rather be on my birthday!
born October 4, 1972
Just watched the CBS Elvis Concert special that aired 45 years ago tonight October 3, 1977
Spending my Birthday Eve on the deck reading looking over into Graceland’s backyard.
Morning Walk Up on the 45th Anniversary when Elvis and Gladys were moved from Forest Hill to Graceland on the night of October 2, 1977
We made it to Memphis!