Keeping my one Denver Broncos game a season streak alive, I made my way to Cleveland this past weekend. Since I was going to be in Cleveland, I decided to visit the Rock and Roll Hall of Fame. I left my house in Ellicott City, Maryland just after 8am Saturday morning. The first two hours, the two hours still in Maryland on Route 70, were a beautiful drive full of changing leaves, open road and no construction. On the Pennsylvania Turnpike on Route 76, temperatures dropped into the 30s and it sleeted. Around 11am I stopped in Stanton at a Travel Stop for gas, a bathroom break and lunch – tuna sub, which I ate half and saved half for later. It was SO windy and cold and cloudy for the rest of the drive onto the Ohio Turnpike on Route 80 and into Cleveland on Route 77.

On my six-hour drive, I listened to what I call my ‘perfect mix’ on my ipod. A mix of my favorite music: Elivs, U2, Lisa Marie Presley, Bobby Darin, NKOTB, Johnny Cash, Eminem, Olivia Newton-John and Al Kapone. Eclectic? 363 miles later, around 2pm, I arrived at the Rock and Roll Hall of Fame, even before checking into my hotel – actually I parked at the Science Center next door for a $2 discount because the Rock Hall does not have its own parking. As I walked out of the Science Center, I was greeted by clouds and a wind so cold it tore through my soul. Ok, maybe I exaggerate, but it really was cold maybe 40 degrees with a wind chill of 30. 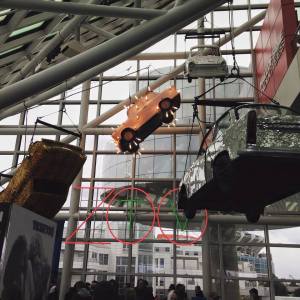 I haven’t been to the Rock and Roll Hall of Fame since 2002, before U2 was inducted. I just want it on the record that I still believe the Rock and Roll Hall of Fame should be in Memphis where Rock and Roll was born (Sun Studio), not in Cleveland where a DJ coined the phrase Rock and Roll. As soon as I walked into the Rock and Roll Hall of Fame, I saw U2’s huge florescent ZOO TV sign and Trabant cars hanging from the ceiling in the lobby just as they were in 2002 when I was there. Then I immediately saw a huge Elvis sign directing visitors to the exhibits. It’s great when my worlds collide like that. Then I walk into the intro movie and see Larry Mullen talking about U2. Yeah my trip to the Rock Hall started out perfectly. Elvis had his own room with a movie and all sorts of memorabilia including an Elvis jukebox. U2 had their own case of memorabilia including Larry’s snare drum from 1980, his hat from ZooTv and his Harley Davidson leather jacket he wore in the “I Still Haven’t Found What I’m Looking For,” which is my favorite song and video. There was a wall with etchings of the signatures of all the inductees, a great rock photo exhibit by Herb Ritz and a ZooTv inspired exhibit on music videos titled “Music Killed the Radio Star.”

I left the Rock and Roll Hall of Fame and drove just under a mile down the street to my hotel, the Aloft. I checked in and unpacked and was across the street at FlipSide restaurant/bar by 5pm. I had a nice stout, the yummiest bacon cheeseburger and sweet potato fries. I went back to my room and rested up for the big game the next day.

After barely six hours sleep, I was up bright and early Sunday morning ready to watch my Broncos! I looked out the window and saw dark clouds, wind and snow/sleet. What the heck? It’s not even Halloween yet. Since it was snowing and in the 30s, I decided not to go to First Energy Stadium early to try to meet the players as they arrived. Instead, I arrived around 10:30am, a half hour before the gates open – still too early to be standing out in that frigidly cold wind. I lined up at the gate with fellow Broncos fans from Virginia, Indianapolis, New York and Tennessee. 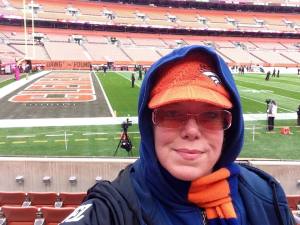 Once inside, I quickly ran to my seat (completely forgetting to stop by the team store for my game day pin) so as not to miss a second of warm ups.  I couldn’t have been happier with my seat! I was six rows off the field at the goal line on the Broncos side between the tunnel and the bench (and far away from the Dawg Pound). The players came out to warm up: first the kickers, then the receivers, then the quarterbacks, then the defense and then the coaches and front office including my reason for being a Broncos fan JOHN ELWAY! It was at this moment when I felt, or rather heard, the hatred of the Cleveland fans for my Denver Broncos – especially John Elway. They haven’t gotten over “The Drive” – where we beat them in the last two minutes driving 98 yards to tie the game and then won with a field goal in overtime. That was January 11, 1987, almost 30 years ago – get over it! Or maybe they are angry because the Broncos have beaten the Browns the past 11 times they have played. For whatever the reason they hate the Broncos so much, Cleveland is a rough town with their fans rivaling those in Philadelphia.

It was a crazy, sloppy, ugly game in the cold, cloudy, windy at the second mistake by the lake in Cleveland, but at least my Denver Broncos remained undefeated in their 26-23 OverTime win against the Browns. Aquib Talib had another pick six, Emmanuel Sanders had a 75-yard Touchdown from Peyton Manning and Brandon McManus went three for four including the game winning field goal in OT. Otherwise, the Broncos did not look good. Peyton threw two interceptions and our number one defense looked anything but. Luckily my section was a good mix of Broncos and Browns fans. I was of course very loud cheering on my team. I never boo an opposing team. I just cheer for my own team – and very loudly. But if anyone yells anything against my team, I will yell back defending them. Needless to say, I got a lot of stares and don’t think I was very popular in Cleveland. (oh well!) The second that ball cleared the uprights, I ran down to the front where I had been for pregame warm ups to watch my Broncos leave the field. As the players were running by, I realized the stadium was playing U2’s “Desire” over the loud speakers. What a perfect victory song for me! Then John Elway walked by and I started screaming! He just gave me the head nod and smiled.

After all the players had gone inside and the stadium had almost cleared out, I figured it was safe for me to start my walk back to the hotel. I was going to go wait out to try to meet the players, but according to the video the Broncos posted they drove into the stadium (giving no opportunity to meet them outside). And when we were walking out, we saw the motorcade drive out, so I didn’t miss any opportunities. I used the phrase ‘walking out’ loosely. It was a pedestrian traffic jam to where we were all a huge mob shuffling toward the intersection – and this was outside of the stadium. On the almost mile walk back to my hotel and even inside the hotel lobby, I was yelled at and booed for being a Broncos fan. All I had to say was, “We’re undefeated 6-0!” That seemed to silence them. Too cold and too tired to go to the casino a mile or so away, I stayed in my room the rest of the night since I had to get before 6am to drive home the next morning.

I have stayed at The Aloft once before, in Milwaukee and loved it. Aloft is a dog-friendly hotel where they really cater to dogs, but I did not bring my dogs this time. It is also a very liberal, modern and green hotel. The staff at this Aloft was fantastic, but my stay wasn’t. I was kept awake both Saturday (until 2am) and Sunday (until 1am) nights to the booming music in the restaurant/bar below. I was on the second floor facing the street where the bar was located, actually a few bars. The room service the hotel used came from that same restaurant/bar, Lago, and they didn’t even answer the phone when I tried to order food after the game Sunday. The front desk gave me a number for pizza delivery, and it was not very good either – and that’s a lot coming from me. The pizza was over cooked, so the cheese was hard and crunchy. I did order breakfast Sunday morning from the hotel, but I had to go pick it up myself. They were out of hot chocolate, so they gave me coffee which I don’t drink. I am not sure if I would ever stay at this Aloft again because of the outside noise and lack of good room service/delivery.

I was in my car by 6:15am Monday morning for my drive home. A road trip is certainly more fun going than it is coming back. It was an all Presley six hour drive. First Elvis, then his daughter Lisa Marie. Kind of fitting. I was driving home and listening to Elvis feels like home to me. (and listening to Lisa just keeps me awake – her rebel music pumps me up) I stopped once at a Travel Stop in Stanton, PA for snacks, gas and a bathroom break. I made it home by noon and was greeted by two very excited dogs.

Three things I learned on the road:
(1) Any road with a speed limit of 55 mph or higher should have three lanes.
(2) Trucks should not pass trucks, especially on those roads with only two lanes.
(3) People don’t pay attention to speed limit changes. I guess they don’t think the signs apply to them.

Please click here to see all of my photos from my weekend in Cleveland.

My favorite time of the day to read 📚
Repost from @ontheroadwithu2 - #NKOTB showing some #U2 love! #worldscolliding
‪It’s rare I read fiction, but sometimes I just get a hankering for it. This is a great one! #reading #stayhome #sundayfunday #books 📚 ‬
Happy Birthday Priscilla Presley! You make 75 look good!
This is me
Today’s Elvis Reading ... Jack Soden’s Elvis and the Colonel mag from 1994 I just got yesterday and the We Remember Elvis book by Guy Harris and the Tupelo gang I got the last time I was in Tupelo. #elvis 📚 #reading 📖