Although I really wanted to write about one of my new favorite Elvis songs “Shake A Hand” for the A to Z Blogging Challenge, there is no other more important ‘S’ Elvis topic than Sun Records and Sam Phillips. (But if you unfamiliar with “Shake A Hand,” check it out because it’s really good.) I love Sun Studio SO much, it is my second favorite Elvis place to visit after Graceland. Just the music history of the place, where all the greats recorded. You can still feel their energy in that little studio in Memphis.

All Elvis fans know and music fans should know the story of Sun Records, where Rock ‘n Roll was born (not Cleveland even though the Rock ‘n Roll Hall of Fame is there just because a DJ Alan Freed coined the phrase). Sam Phillips opened Memphis Recording Service at 706 Union Ave in Memphis, Tennessee and recorded anyone anytime anywhere regardless of color (black or white) or type of music (gospel, country or blues). Sam recorded Howlin’ Wolf, BB King, Bobby Blue Bland, Rufus Thomas, Little Milton and Ike Turner’s band with “Rocket 88,” which is said to be the first Rock ‘n Roll record. In 1952, Sam Phillips started Sun Records – he was no longer just recording artists but now putting out their records as well.

In 1953, an 18-year old Elvis Presley walked in to Memphis Recording Service wanting to make a record for his mother. Sam Phillips was not in the studio that day, but his assistant and partner Marion Keisker was. She recorded Elvis singing “My Happiness” and “That’s When Your Heartache Begins” and gave him his record and sent him on his way, but not before leaving a note for Sam about the young singer. A year later Sam needed a good ballad singer for a song he wanted to put out on Sun and called Elvis to come in and record with Scotty Moore (on guitar) and Bill Black (on bass). They recorded “That’s All Right Mama,” which immediately became a regional smash hit for Sun Records.

Mystery Train / I Forgot to Remember to Forget 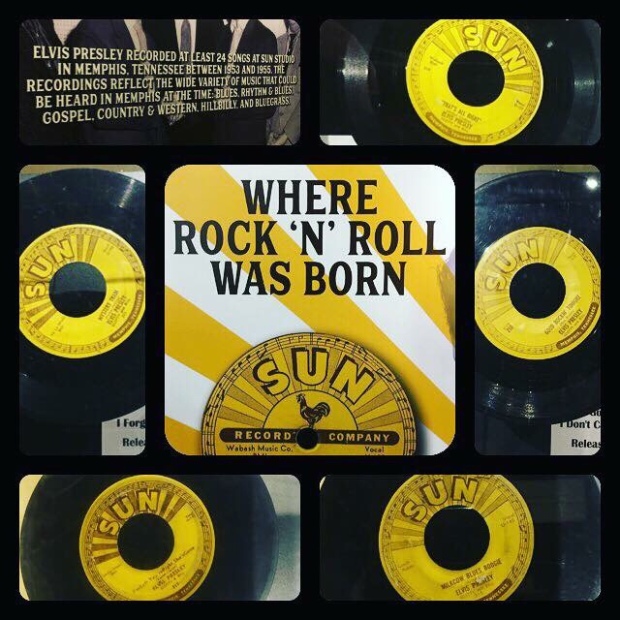 Elvis’ recordings with Sun Records mixed country with blues and R&B making a whole new sound called Rockabilly, which turned into Rock ‘n Roll. This infusion of musical styles helped begin to break down music and racial barriers as Elvis had hits on the Pop, R&B and Country charts. The success of Elvis Presley’s records brought others to Sun including Johnny Cash, Carl Perkins, Jerry Lee Lewis, Roy Orbison, Charlie Rich and Conway Twitty. All of these artists grew to international fame with hits on the Pop, R&B and Country charts. 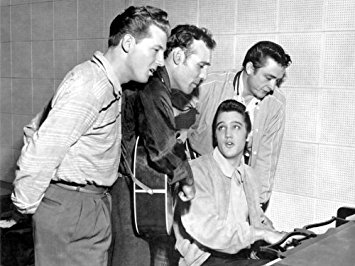 No story about Sun Records would be complete without discussing The Million Dollar Quartet. On December 4, 1956, Carl Perkins (along with his band) was at Sun recording his new record and Jerry Lee Lewis was there to play piano on it. Both Johnny Cash and Elvis stopped by to visit. They began an impromptu jam session that was recorded. The next day the Memphis newspaper placed a photo with the caption “Million Dollar Quartet.”

What is your favorite movie, song, book, topic about Elvis that begins with ‘S’? Please comment below. If you missed any of my Elvis ‘A’ to ‘R’ topics, please click here. Remember to check back Monday to see what ‘T’ topic I’ve chosen for Elvis.

4 Comments on Sun Records – Elvis from A to Z