I had a great time at Trax on Wax in Catonsville, MD for Record Store Day yesterday. It was the best one yet! I went with a list and got everything and then some! Record Store Day began in 2007 and is held one Saturday every April, and the past few years there has been a smaller Record Store Day on Black Friday. A limited number of records are pressed specifically for Record Store Day and distributed to independent record stores. These are special edition releases that are only released on this day – some new music, some never release before released on vinyl and some that hasn’t been on vinyl in 30 years.

Record Store Day this year was the biggest yet with its 4000 releases. For the first time since I have been going to Record Store Day, there was an Elvis release so already it was my favorite Record Store Day. In celebration of the 50th Anniversary of the ’68 Comeback Special, Elvis Presley The King in the Ring was released. It was a double lp on red vinyl of both the sit-down shows from the June 27, 1968 recording. This had never been released on vinyl in its entirety before. That was number one on my list. Number two on my list was U2’s single “Lights of Home” on picture disc, which by the way cost as much as the Elvis double vinyl. Number three on my list was the Johnny Cash five album box set of both live shows at Folsom Prison (also in 1968) and the rehearsal At Folsom Prison: 50th Anniversary Legacy Edition. This was the first time both full concerts and the rehearsal have been released together. Fourth on my list was the Sun Records release The Other Side of Sun Part 2, which is the fifth Sun Records release on Record Store Day – I get it every year. Fifth on my list, which I just found out about the night before, was Soundgarden’s A-Sides, which is a double lp of the record released in 1997 of their greatest hits. This is the first time it has been released on vinyl. Sixth on my list was the Madonna You Can Dance on red vinyl, which was a reissue of her first  of the remix album that had not been available on vinyl in 30 years since its release in 1987.

There were some other Record Store Day releases I had my eye on like the Marvin Gaye and the Duran Duran, but my pile was getting quite heavy and quite expensive. I did have the other Madonna release in my hand but decided against it when I found the original release. Yes it is used and not a pretty picture disc, but it was the original. So I got Madonna’s first three albums as well. And of course I had my list of Elvis records I wanted to check out and I found two of the three on my list to add to my collection – His Hand in Mine and On Stage. I was feeling pretty accomplished. And the day only got better when Gary, the owner of Trax on Wax, gave me a bag of Elvis memorabilia he had gotten from a lady who used to run an Elvis Fan Club – this was after he asked me to sign my U2 book that I wrote (very flattering!). There was some great stuff in that bag like photos of Elvis and fanzines and an old fan letter from 1977, but the best was the stuff from the ’68 Comeback Special that completely coincides with the 50th Anniversary. It was a souvenir photo album and souvenir tickets to both stand up shows – in the envelope! A very cool find! Thank you Gary! 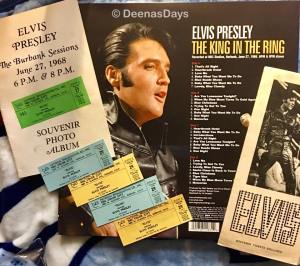 It was a great day. I got in line at Trax on Wax around 9am – the store was opening at 10am. I was at the end of the block. They had donuts and coffee for everyone. My U2 friends Juliana and Amy soon joined me in line. And Gary came through talking with everyone as he always does, and we took our annual selfie with him. At 10am, the doors open and we were let in 10 people at a time. We were inside just before 10:30am. And when I walked out about 45 minutes later people were still waiting to get inside with the line almost to the end of the block. It is a wonderful thing to see people of all ages and from all walks of life brought together by their love for music – and vinyl. Music truly is the only thing that crosses all barriers. 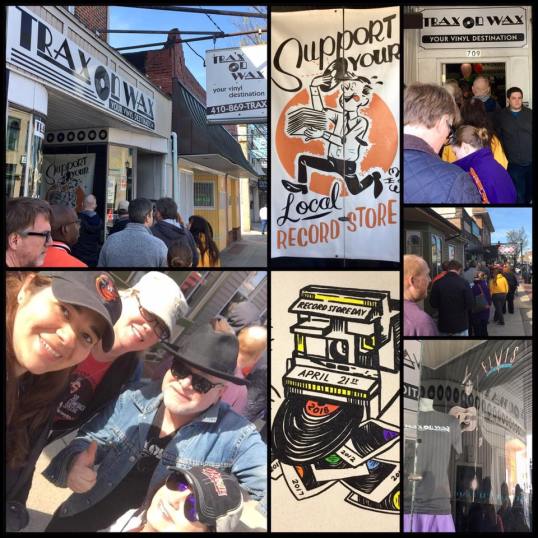 Just heard the great drummer Ronnie Tutt passed away. Was hoping it wasn’t true. SO glad I was able to meet him a few times over the years. What a great guy! Thanks for the music Ronnie!
Happy Birthday Luke, we miss you!
#fbf in 2018 I bought Tix to 2 #NKOTB shows in Memphis and DC for the 2019 tour and yesterday in the presale I bought Tix to 2 NKOTB shows in Dallas and DC for the 2022 Tour. (No show in Memphis this tour) Regular onsale is today. Guess Oct8 is the day NKOTB concert Tix go sale each year, except during a pandemic.
14 years ago today 10.6.07 I gave myself the best birthday present when I adopted my sweet, faithful girl Cilla. She was my constant companion during the quarantine, never leaving my side.
I had a great 49th birthday. Spent the morning winning at the casino and the evening eating a delicious dinner with my family.
Enjoying the perfect Birthday EVE meal thanks to my friend Julie, and I’ll be enjoying it on my birthday tomorrow as well and the next day …