It was supposed to be an easy road win in Philly for the Grizzlies last night. The 76ers had only won two games all season, and the Grizzlies had the second best record in the NBA at 18-4. The Grizzlies were tired from their double overtime win over the Hornets in Memphis the previous night and [continue reading]

The last time I wrote about my Memphis Grizzlies, I was very bitter and disillusioned with the NBA. The Grizzlies had just lost to the Oklahoma City Thunder in round one of the playoffs. I BELIEVE the NBA did not want a small market team like the Grizzlies (actually the smallest tv market) to [continue reading]

Game 1 was all Thunder. Game 2 was up for grabs. Game 3 was all Grizzlies, until the final minute. Memphis continued its consecutive win streak at the Grindhouse as the Grizzlies defeated OKC 98-95 in overtime, taking a 2-1 lead in the series. The Grizzlies did what they always do, grit and grind [continue reading]

It was announced today that Memphis Grizzlies’ point guard Mike Conley is the 2013-2014 NBA Sportsmanship Award winner. Conley is the first Grizzlies player to receive the Joe Dumars Trophy. A $10,000. donation by the NBA on behalf of Conley will be given to the charity of his choice, the [continue reading] 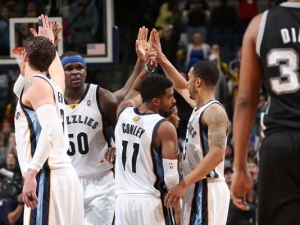 If you are a Memphis Grizzlies fan, last night’s game was encouraging, heartbreaking, but encouraging. If you are a San Antonio Spurs fan, not so much. The Southwest Division leaders almost let the last place Grizzlies come from behind and defeat them, almost. San Antonio led the entire game. [continue reading]

Grizzlies power forward Zach Randolph left last night’s game after only eight minutes to rush to the hospital for the birth of his third child. He made it just in time to welcome his baby boy. That was the good news. In fact, it was pretty much the only good news in last night’s 84-99 [continue reading]