For the first time in 8 years, Tasha and I did not attend the Beale Street Music Festival.

We decided that we should see and do everything we wanted on Friday because of the storms forecasted for Saturday and Sunday. We started off Friday morning with a yummy breakfast at Blue Plate – the best biscuits!!! We went to get some groceries to stock up in case we were forced inside for days. Then we stopped by Flashback to browse the retro trinkets that I love so much. Next stop was Sun Studio. We didn’t take the tour, but just soaked up the atmosphere.

We had lunch at the Cupboard, but they were out of my favorite eggplant casserole. We went home for a couple of hours before heading out to Trolley Night on South Main. First stop was to pick up some art from Mike Maness at See the Difference gallery. Then we wandered into Loudspeak Design Studio and fell in love with Paul Clarke’s photography. 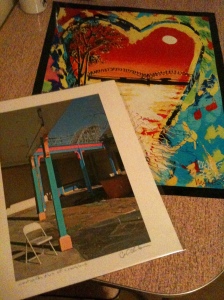 Deciding it was safe to go to MusicFest because the tornadoes weren’t coming until after 10pm, we headed toward Beale and Riverside Drive only to find a line that was WAY too long. 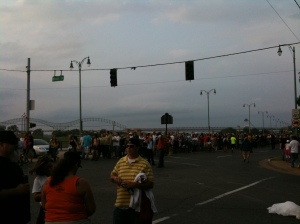 We turned around and enjoyed the patio at Alfred’s on Beale instead. 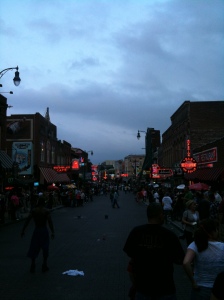 We were home before 10 and under a tornado watch by midnight. I was awakened, along with everyone else in Memphis, around 4:30am by the tornado siren and texts about the tornado warning. Luckily it passed and did not hit midtown. The rest of the day was spent in front of the television watching the weather and waiting for the tornado to hit. Luckily, we had time to order a pizza. In addition to the tornado watch, there was flooding. We had several inches of rain in the past 24 hours. The phrase of the day was Turn Around Don’t Drown because people’s cars were under water and roads were washed out. MusicFest was postponed 3 hours and the first bands on each stage were cancelled, this was in addition to Bret Michaels and Flaming Lips previously cancelling for health reasons. With the impending tornadoes and flooding, we weren’t going anywhere. Around 9pm things got really scary. There was a tornado warning and it was heading in our direction. MusicFest was evacuated and bands such as Hall and Oates and Alice in Chains were cancelled. Tasha and I decided the innermost room in my house was the dog’s room, so we gathered our supplies and joined the dogs in their room and waited for the tornado.

shelter from the storm

Luckily the tornado did not hit us. We awoke Sunday morning to much better conditions. In fact, we wanted to drive around and survey the damage but remembering to Turn Around Don’t Drown.

how high's the water? 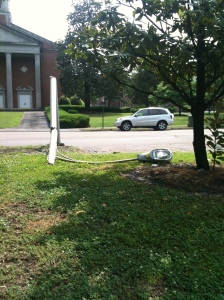 While driving around, we passed by Audubon Drive, so I had to stop at Elvis’ old house. 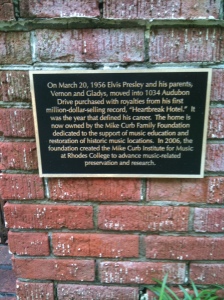 We drove to Getwell Road between 240 and the Mississippi state line, which was renamed Jerry Lee Lewis Highway on Friday.

Tasha wanted to see the Penguins hockey game, so we went to Young Avenue Deli for lunch.

We could have went to MusicFest Friday night, but we didn’t want to wait in line over an hour just to leave before 10 because of the tornado watch. And we could have seen Jerry Lee Lewis Saturday afternoon, but we had seen him the past 7 years and there was a tornado watch that we didn’t want to risk getting caught in. Sunday there was no threat of tornado and it had stopped raining, but there was SO much mud and honestly by then we were over it. About 1/3 of the bands had cancelled. This was just not a good weekend for the Beale Street Music Festival.

Have 2 weeks to read the last 2 volumes of The Elvis Files to reach my goal (of reading all 8 volumes by Elvis Week)
Hoping your weekend is as relaxing as mine! 📚 😎
2 weeks from today I leave for Memphis for Elvis Week 2021