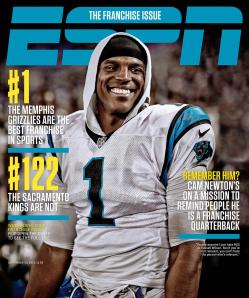 In their Franchise Issue hitting the stands Friday, ESPN The Magazine named the Memphis Grizzlies “the best franchise in sports.” The magazine broke the news Tuesday on Twitter, “The @MemGrizz are the best, Sacramento Kings are the worst & Cam Newton is on a mission. #FranchiseIssue out Friday.” ESPN determines the best franchise in sports by ownership, venue experience, affordability, fan relations, and wins and revenue directly from the fans. The Grizzlies were ranked No. 9 in 2011 and No. 5 in 2012. Memphis became ESPN’s best franchise in sports after appearing in the Western Conference Finals last season. This is definitely a coup for the small market Grizzlies!

Sitting outside to avoid having to wear a mask while Big Orange gets checked out before the big road trip next month. Luckily it’s in the 70s today! 🍊 🚗
The first Record Store Day was held on this day in 2008. The event was founded to celebrate the culture of the independently owned record store.
ELVIS MOVIE SUNDAY
Because like a cheesy Hallmark Christmas movie, sometimes you just don’t want to think
Postponed to next year ... again. At least they’re still having it. #ToadTheWetSprocket #GinBlossoms
A great book I just finished by Potsie aka Anson Williams.