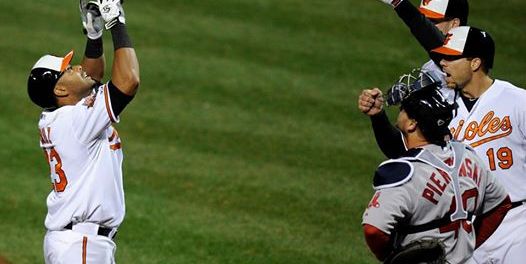 The Baltimore Orioles are 1-1 in their first two games of the season against the defending World Champion Boston Red Sox. The Orioles defeated the Red Sox on Opening Day Monday 2-1, then Baltimore lost to Boston Wednesday 6-2. Outfielder Nelson Cruz scored all four of the Orioles’ runs.

In February, the Orioles signed Nelson Cruz to a one-year deal. Cruz played with the Texas Rangers for the past eight seasons, including a 50-game suspension last year due to a steroid scandal.

Nelson Cruz was the Opening Day hero Monday in his first game as an Oriole. Cruz scored Baltimore’s first run then homered in the seventh inning, breaking a 1-1 tie giving the Birds a 2-1 win over the Sox. Cruz is the 25th Oriole in club history to homer in his first game. On Wednesday’s 6-2 loss, Cruz tied the game in the fourth inning with a two-run blast.

Word on the street is Nelson Cruz still hasn’t found a place to live in Baltimore. I hope he finds a place soon because Cruz is responsible for all of the Orioles’ 2014 offense.

Happy Birthday Luke, we miss you!
#fbf in 2018 I bought Tix to 2 #NKOTB shows in Memphis and DC for the 2019 tour and yesterday in the presale I bought Tix to 2 NKOTB shows in Dallas and DC for the 2022 Tour. (No show in Memphis this tour) Regular onsale is today. Guess Oct8 is the day NKOTB concert Tix go sale each year, except during a pandemic.
14 years ago today 10.6.07 I gave myself the best birthday present when I adopted my sweet, faithful girl Cilla. She was my constant companion during the quarantine, never leaving my side.
I had a great 49th birthday. Spent the morning winning at the casino and the evening eating a delicious dinner with my family.
Enjoying the perfect Birthday EVE meal thanks to my friend Julie, and I’ll be enjoying it on my birthday tomorrow as well and the next day …
Now I’m even more excited I’m getting a Subaru!