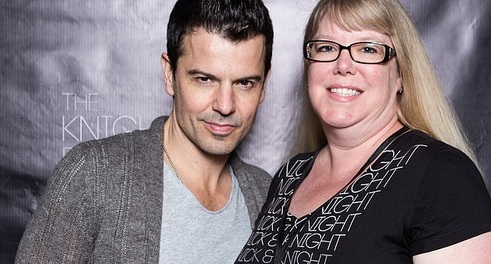 I didn’t know what to expect from the Nick and Knight Tour because I don’t know much about Nick Carter or the Back Street Boys and was obviously only going to see my favorite New Kid on the Block Jordan Knight, but I loved it! The Nick and Knight show is fantastic! Very entertaining! Those two are quite the showmen, and they are having a great time together. The best part (unlike the NKOTBSB show I saw) was both Nick and Jordan stayed on the stage together the entire show. There was no waiting through Nick’s set to get to Jordan’s. They sang together on every song, although Jordan did sing one solo but that was ok 🙂

I left for Philadelphia Saturday afternoon around 12:30 wearing my Nick and Knight shirt listening to the cd on repeat. Yeah, I’m a 42 year old fan girl! I had to be at the Trocadero by 4:45 to check in for the VIP Knight Experience (meet Jordan and listen to sound check). That gave me four hours, and it’s only a two hour drive at most. It should have been so easy, but I had no idea the traffic and parking situation was going to be so bad Philly. I have been going to concerts and games in Philly since the 1990s, but I always just get off at the stadium/arena exit which is literally right off 95. I haven’t really ever driven through Philly, and obviously not on a Saturday afternoon. Ugh! Lots of times I fall in love with the city I am in for a concert or a game, but not this time, not Philly – ever!

With that said, my hotel, the historic Alexander Inn, was quite lovely and in a great little neighborhood. I arrived around 2:45, after circling the block three times looking for parking before realizing I could parallel park across the street temporarily to unload my bags and check in. My room was not ready, and it still wasn’t ready an hour later even though they guarantee a 3pm check in. Oops! Also found out my room did not have a refrigerator or a microwave. Too bad I had brought drinks and a pizza from Ledo’s for after the concert. They did have a microwave behind the front desk I could use and a ice bucket in the room to fill up from the ice vending machine in the lobby or basement. While waiting for my room, I went to park my car in the garage three blocks away. I had to circle around twice to find that too because a bus was blocking the parking garage entrance my first time around. I made it back to the hotel and the front desk guy, who couldn’t have been nicer, found a room for me that was ready even though it wasn’t the room type I reserved. I was in my room at 4pm and had to be at the Trocadero about a mile away by 4:45 at the latest to check in for my VIP with Jordan. I quickly hung up my clothes (for the Broncos game the next day in Jersey) and was out the door – shoving a piece of cold pizza into my mouth along the way. I was not going to drive my car and get back into that terrible traffic again, plus I didn’t want to walk three blocks when the venue was only 9 blocks away. And I didn’t want to pay for a cab, so I walked.

I saw everyone waiting outside the Trocadero Theater, in the middle of China Town. There were two lines, one for Jordan and one for Nick (the Jordan line was much longer). Before I could get in the Jordan VIP line, I had to go to will call to pick up my ticket. I was freaking out because it was 4:30 and the VIP check in was at 4:45 and there were three guys in front of me buying tickets one by one for a show next week. I finally got my ticket and hurried to the back of the line. An hour later I was still waiting. Guess I forgot NKOTB is always late, even when it’s just Jordan. Guess I can’t blame Donnie anymore 🙂 Around 5:45 I finally met Jordan, for the third time. And it was just as quick as all the rest, well not as quick as the DC after party when literally all I did was stand next to him for a picture. Saturday night I walked up to Jordan, said, “Hi.” He said, “Hi.” Then I hugged him. Then I said, “Congrats on the Star (meaning the star on the Hollywood walk of fame)>” He said, “Thank you.” Then we took a pic with our arms around each other. I said, “Thank you.” He said, “Thank you.” It was a very meaningful and deep conversation. I have got to think of something more interesting to say for the meet and greet on Friday.

I found a spot all the way on the left of the stage two people back to wait for sound check. I am going to get to the Baltimore VIP line earlier, so I can be one of the first in to meet Jordan. Because the first people to meet him are the ones first into the venue and get the closest spots at the stage for the show. And the Nick Carter fans already have an advantage because their VIP line is shorter, so they get in quicker than us. As I was standing there, Jordan walked right by me (as I was standing next to the stage door) with a cupcake. He was very happy and friendly and relaxed. A few minutes later, I looked up I looked up as someone was walking by my really close almost falling into me – it was Nick Carter. The 10 seconds I had meeting Jordan, hugging Jordan and “talking” to Jordan was great, but being there for the sound check made the VIP worth it. It was SO much fun! It lasted about 45 minutes. It was fun just listening to Jordan and Nick warm up and goof around and be so relaxed. Jordan really interacted with us during the sound check. Nick really didn’t, but he stayed out longer than Jordan. I was very happy they sound checked my favorite “Halfway There.” Another exciting part for me was when Jordan was checking his mic and said, ” “Uno, dos, tres,” then paused and said, “catorce!” then laughed. I really thought he was going to bust into “Vertigo,” but he did not. Maybe that is what I’ll ask him Friday – if he’s a U2 fan.

The show was supposed to start at 8pm, but didn’t start until 8:20, so we had an hour and twenty minute wait between sound check and the show. Slowly the Trocadero Theater (which is a dump by the way) filled up – it was shoulders to shoulders upstairs and down. It was such a fun show! They opened with “Nobody Better” and played straight through for an hour and a half, including two BSB songs and two NKOTB songs (“If You Go Away” and “The Right Stuff”). There was a 90s cover set in the middle, which including a lot of pelvic thrusts and floor humping – watch my video. Sigh! The guys changed their outfits three times, but they must changed very quickly because there wasn’t any down time. They closed the show with NKOTB’s “The Right Stuff” then BSB’s “Larger Than Life” and then an encore of the end of “One More Time,” which they actually did one more time earlier in the show in its entirety. The irony was not lost on me 🙂 Even though the VIP line was shorter for Nick than Jordan, it seemed as if the crowd was more excited for the BSB songs than the NKOTB songs, which surprised me. I guess they are a bit younger and remember the 90s more than the 80s.

On my mile walk back to my hotel after the show, I ran into the two women I sat next to at the second NKOTB show in Vegas in July. Small NKOTB world. It was really funny. I made it safely back to my hotel (there were a lot of people walking around) and was in my room by 10pm to rest and get ready for my Broncos game in Jersey the next day. I was exhausted because I had been running all day with no down time. Sad this was my last road trip until the U2 tour next year (I have to save money and vacation days) – unless you count my day trip to Philly in December to see my Grizzlies play. I do get to see one more Nick and Knight show though, this Friday in Baltimore.

Click here for all 88 of my Nick and Knight pictures from Philly. And follow me @DeenasDays on Twitter this Friday as I do it all again!