Game 1 was all Thunder. Game 2 was up for grabs. Game 3 was all Grizzlies, until the final minute. Memphis continued its consecutive win streak at the Grindhouse as the Grizzlies defeated OKC 98-95 in overtime, taking a 2-1 lead in the series. The Grizzlies did what they always do, grit and grind [continue reading] 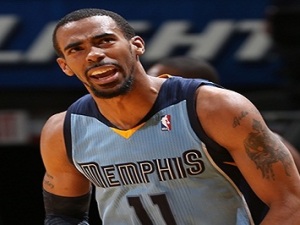 It was announced today that Memphis Grizzlies’ point guard Mike Conley is the 2013-2014 NBA Sportsmanship Award winner. Conley is the first Grizzlies player to receive the Joe Dumars Trophy. A $10,000. donation by the NBA on behalf of Conley will be given to the charity of his choice, the [continue reading] 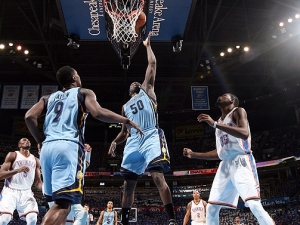 Game 1 was all Oklahoma City, but the Memphis Grizzlies silenced the Thunder in Game 2 with a thrilling 111-105 win in overtime to even the series. To say this game was a nail-biter, would be an epic understatement. Memphis led the entire game stopping OKC each time they tried to rally. The [continue reading]

With their 50th win of the season, their 14th consecutive win at home and fifth win in a row, the Memphis Grizzlies clinch the seventh seed in the Western Conference defeating the Dallas Mavericks 106-105 in overtime. This win gives No. 7 Memphis a first-round playoff matchup with No. 2 Oklahoma [continue reading]

With just seven games left, will the Memphis Grizzlies make it back to the playoffs? Winning just two games of their five-game road trip, the Grizzlies are back in the No. 8 seed in the Western Conference. There are three teams vying for two playoff spots in the West: The Dallas Mavericks, the [continue reading] 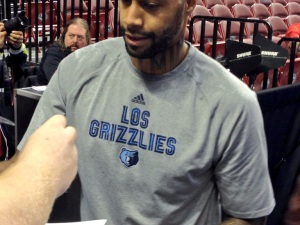 The best things happen when you don’t plan them. It was Friday night, and I realized I had no plans for the entire weekend. I remembered the Grizzlies were playing the 76ers in Philadelphia Saturday night. It’s only a two-hour drive, so I got online and bought a ticket. You only live [continue reading]